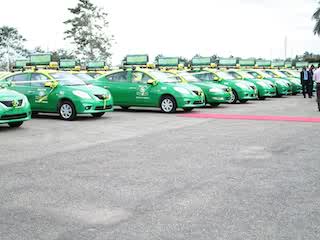 Ogun State Governor Ibikunle Amosun has reiterated his administration’s commitment to construction of roads and provision of vehicles to make traveling more comfortable, safe and worthwhile for the good people of the State.

The governor said this yesterday while inaugurating the State Taxi Scheme.

The first phase of the Taxi scheme with 150 brand new air-conditioned
Nissan Sunny/Almera brand of vehicles were given to commercial cab drivers from across the State.

While flagging off the scheme at the Arcade ground, Governor’s office,
Oke Mosan, Abeokuta, Amosun said the inauguration of the scheme was in
fulfillment of his promise when he launched the Bus Mass Transit
Scheme last year.

According to the governor, the re-invigoration of the transport system in the State
became necessary following the challenges associated with the new economic status and development of the State.

He explained that as a result of influx of people to the State, the
State government apart from providing security to encourage investments, has also intensified efforts on road construction
to ensure free flow traffic of people, goods and services.

The governor said his administration through the Bureau of Transport has designed traffic signs, installed traffic lights, lane marking to ensure free flow of traffic and safety of road users.

Amosun therefore urged people of the State including business concerns and
politicians to take advantage of the taxi to advertise their messages.

He also spoke of his administration’s plan of introducing metering
system in the public transportation system in the State.