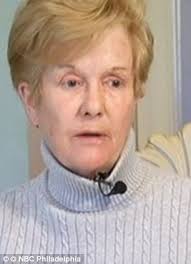 PHILADELPHIA — A suburban Philadelphia woman is suing US Airways, saying her husband’s ashes disappeared from her luggage as she flew to England to bury them in his hometown of Hull.

Angeline O’Grady’s husband, Brian, died of cancer in October 2011. She was flying his ashes to England the following month when she says Transportation Security Administration told her she couldn’t take the ashes through security at Philadelphia International Airport.

O’Grady says she was directed to the US Airways counter and put the ashes in her checked luggage. The Trumbauersville woman says the ashes were missing when she touched down in England.

US Airways spokesman Andrew Christie said an internal investigation didn’t uncover any information indicating that the airline is responsible for the loss of the ashes.