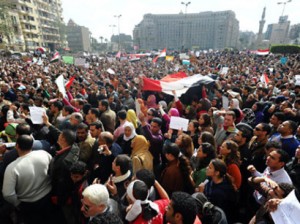 Pro-Morsi protesters continue showing their resilience in Egypt, as they marched out in thousands in several cities across the country to protest against military rule.

At least one person has died in the protests that took place after Friday prayers in Ismailiya, Suez, Assiut, Alexandria and the capital, Cairo, among other cities, waving Egyptian flags and chanting “down with military rule”.

Others held up pictures of toppled President Mohamed Morsi, who was ousted by the military on July 3 after mass protests against him.

Sources say most protests were taking place peacefully, though some incidents of violence had been reported in some parts of the country.

Morsi’s Muslim Brotherhood had called Friday’s protests for “the people to protect the revolution”,’ in reference to the uprising that ousted longtime ruler Hosni Mubarak in early 2011.

Protests have been getting smaller in recent weeks following bloodshed in mid-August that killed more than 1,000 people, most of them when security forces broke up pro-Morsi sit-ins in Cairo.

The military backed regime in Egypt have commenced moves to outlaw the Muslim Brotherhood after arresting and prosecuting key leaders of the group, whose crime among others was inciting violence.