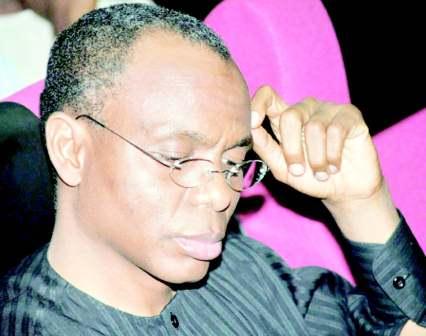 The Christian Association of Nigeria on Sunday gave former Minister of the Federal Capital Territory and All Progressives Congress, APC, deputy national secretary, Malam Nasir el-Rufai seven days to tell Nigerians the identity of the person, who bought a private jet for its national president, Pastor Ayo Oritsejafor, or it would expose him and his “dirty life”.

Rev. (Dr.) Emmanuel Dziggau, the Head of TEKAN/ECWA Block in CAN, “Tarayar Ekklisiyar Kristi A Nijeriya” in Hausa language, a conglomeration of 13 church groups in CAN, and CAN’s National Director of Research, Planning and Strategy, Elder Sunday Oibe in a statement, said they were reacting to an interview the ex-FCT minister granted a national daily in which he derided the CAN President and questioned his credibility.

In the said interview, when asked if there was any problem between former head of state, General Muhammadu Buhari (retd) and CAN since Pastor Oritsejafor had twice called for his arrest since 2011, el-Rufai responded, “Look, Pastor Oritsejafor is the propaganda chief of the PDP. He lacks credibility.”

When reminded that he was talking about a “religious leader,” the APC chieftain retorted, “He is not a religious leader. He is a religious pretender. From his statements, he is a bigot, he is an ethnic irredentist and no one should take him seriously. It is sad that such a person is the head of CAN. So, he can say whatever he wants to say but we know who he is working for, we know who gave him his private jet. So, why should we worry about someone like that? He has zero credibility.”

CAN also reminded General Buhari that his problem with the country was el-Rufai and not himself.

“It was this same el-Rufai that was abusing Buhari when he was in the cabinet of ex-President Olusegun Obasanjo that is now fighting ex-Vice President Atiku Abubakar and Obasanjo.

“We are giving el-Rufai seven days ultimatum to inform Nigerians and the world the person he claims to know that gave Pastor Ayo his private Jet. If he fails to do that, we will open up on him and his dirty life. El-Rufai stinks to the highest heaven. He is morally depraved and lacks credibility.”