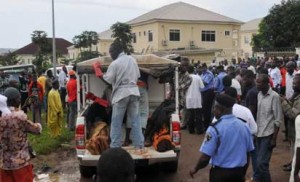 As recent comments and investigations keep pointing at the innocence of victims of the shooting at Apo village by security operatives last weekend, which led to the death of 10 persons who the security operatives claimed were members of the Boko Haram sect, the government has asked for time for it to set up a probe panel to unravel the circumstances that surrounded the incident.

Making the appeal on behalf of federal government, when the a delegation of Nigerian Youth Consultative Forum, led by Mustapha Nurudeen, met with him at the palace of the Emir of Garki District, in company of members of the National Union of Keke NAPEP Riders, FCT branch, Permanent Secretary, Federal Capital Territory, Mr. John Chukwu, appealed to the youths to give government time to look into the matter and come out with facts.

He said the circumstances behind the incident did not call for hasty investigation but required time to enable government arrive at the truth of the matter.

Nigerian Youth Consultative Forum has however issued a week ultimatum to the federal government to institute an independent probe panel to unravel the facts behind the incident and subsequently bring the perpetrators of the act to book or face a nationwide protests by its members.

Making the position known at the meeting, President of the group, Comrade Mustapha Nurudeen, said the youths decided to shelve their proposed protest against the killing of their members to enable government set up the probe panel as promised by it representative.

“After the deliberation, we decided to give the government and the security agencies one week to set up an independent probe panel and to prosecute all the perpetrators of the Apo extra-judicial act, failure to do so after a week, we would mobilize youths throughout Nigeria to protest against the injustice meted at innocent youths, who were killed in cold blood for committing no offense.

“We believe that this kind of dastardly and senseless act by the security men must stop this time before it gets out of hands. we, the youth expect federal government to leave no stone unturned in getting to the root of this matter.
“We also want to appreciate and thank all human rights activists, especially Mr. Shehu Sani, for their patriotism and standing with us on the course to a just society. Nigerian youths assembly has spoken,” Nurudeen said.

On his part, the chief mediator and Emir of Garki District, Alhaji Usman Nga, condemned the attack and called on government to commence full investigation into the matter.

He commended the youths for their calm disposition since the incident occurred and also appealed to them to give government time to set up an independent panel that would investigate the remote and immediate causes of the attack.