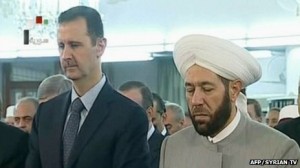 Despite agreeing to give up chemical weapons which forestalled a US military strike, Syrian President Bashar Al Assad said in an interview broadcast on Wednesday that he still does not discount the possibility of a US military attack.

Al Assad also said in an interview broadcast by Venezuela’s state-run Telesur network that his government has confessions from rebels that they brought chemical weapons into the civil war-wracked nation.

According to the broadcast’s Spanish dubbing, Al Assad said all evidence pointed to rebel responsibility for the attack.

He said that Syrian authorities had uncovered chemical arms caches and labs and that the evidence had been turned over to Russia, which brokered the deal that helped persuade US President Barack Obama to pull back from threatened military action over an August 21 gas attack that killed civilians in a Damascus suburb.

In a speech at the UN on Tuesday, Obama said he would not use military force to depose Al Assad. But Washington and Moscow remain at odds on how to hold Syria accountable if it does not live up to its pledge to dismantle its chemical weapons stockpile.

Al Assad predicted during the 40-minute interview that “terrorists” would try to block access of UN inspectors who enter Syria to secure the government’s chemical arsenal.

While Al Assad said he had evidence that countries including Saudi Arabia were arming Syrian rebels, he said he had no proof that any particular country had supplied them with chemical weapons.

He was also asked about the apparent thaw in relations between the US and Iran, his government’s chief patron in the region.

Assad called the development positive but added that he did not consider it to mean that Tehran’s leaders trust Washington. He said it was important that the US stop pressuring Iran not to have nuclear technology.

Al Assad also accused the Obama administration of lying to US citizens by claiming it has proof that Al Assad’s government was responsible for the August 21 gas attack.

More than 100,000 people have been killed in Syria’s two-and-a-half-year-old civil war.