The member representing Akoko-Edo federal constituency of Edo State in the House of Representatives, Mr. Peter Akpatason, weekend, accused the Minister of Finance, Dr. Ngozi Okonjo-Iweala, of being insensitive to the plight of Nigerian students, saying that “she has been blackmailing Nigerians that government does not have the money to meet its agreement with Academic State Union of Universities, ASUU.” 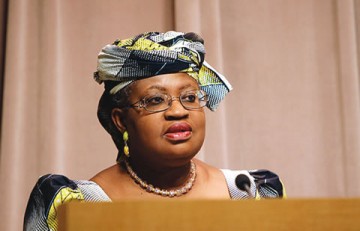 The lawmaker, a former President of the National Union of Petroleum and Natural Gas Workers, NUPENG, said it was irresponsible on the part of the Federal Government to renege on its agreement with ASUU, describing as regrettable, the seeming insensitivity exhibited by government since the commencement of the ASUU strike.

He spoke in Benin City, shortly after the inauguration of Uneme National Development Association’s N100 million Education fund for Uneme communities. According to him, “It is very disheartening that up till now, ASUU is still on strike  but unfortunately, I am not in a position to blame ASUU because I was still fully in Labour when this agreement was negotiated between ASUU and government.

“So, it is irresponsible of anybody to enter into an agreement and then renege. It is totally unacceptable and that is the issue. It is unfortunate that a party has gone into an agreement and today, it is is saying that it has no resources to fund what it signed. Dr. Okonjo-Iweala is known for coming up with statements about inadequacy of funds but yet the entire revenue gates in the country are performing above estimation; customs, oil and gas industry, immigration, they are all doing well beyond what was anticipated, yet Okonjo- Iweala keeps deceiving Nigerians and the whole world that Nigeria does not have money. What are they doing with all our money?”