Some transporters, traders and others who provide services on university campuses have lamented the negative impact of the strike embarked on by the Academic Staff Union of Universities three months ago. 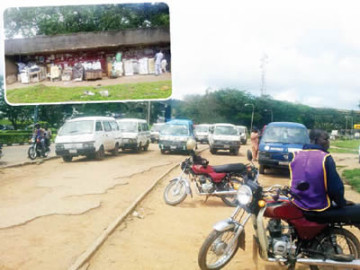 They said the strike was not favourable to their businesses, adding that the strike had reduced their sales and income.

Newsmen, who visited the Obafemi Awolowo University, Ile-Ife, Osun State, University of Lagos, Lagos State, and the Olabisi Onabanjo University, Ogun State, observed that activities in the universities had been paralysed.

Shops, where photocopies and printing works were made, were closed. Few shops that were open operated their services at a high cost.

When Newsmen visited OAU on Friday, it was gathered that traders at the Awolowo, Angola, Moremi and Mozambique Halls of the university had not been opening for business since the strike started.

A motorist, identified simply as Baba Gbayi, told newsmen that some of them were forced to stop operating few weeks after the strike began because of low patronage.

He said, “This strike period is tough for us. Most people who own buses are no longer coming. Only those of us that got our buses on hire purchase are forced to come to work because we have to complete our payment. There is nothing  more killing than this strike because since it has started we no longer see passengers as before.”

Another motorist, Chinedu Akpan, said even the few students on the campus were not willing to board commercial buses because they lacked cash.

Akpan said, “I am praying that the strike ends soon. I have three children and two of my siblings are also living with me. We have been struggling to eat. By the time schools resume from holidays, it will be worse. My prayer is that the strike would be called off before they resume.

“Another thing is that the students are also broke so they prefer to trek. Some of them will even be negotiating the transport fare because they know that we have no choice.”

A trader, identified simply as Iya Sanjo, said, “You can see that none of us opened. The strike is really disastrous as the school management has sent some of the students home. If we must open, we have to use the generator which is more expensive especially when customers are not many.”

At UNILAG, traders at the car park opposite the Mass Communication Department and Jaja Hall opened shops but lamented losses.

A motorist, who drives UNILAG shuttle bus, described the strike as a punishment for the operators.