ASUU SUED: Father, 71, Has Had Enough

There seems to be no end to the Academic Staff Union of University (ASUU) strike. Politicians, students and lecturers all seek for a reasonable solution to this difficult situation, but to no avail. Some young people who are affected by the strike support it, some have expressed their disapproval. Nigeria’s leader Goodluck Jonathan has personally ordered to find a way out of this educational-political-economic drama. Looks like the time has come for the older generation to speak up on the matter. 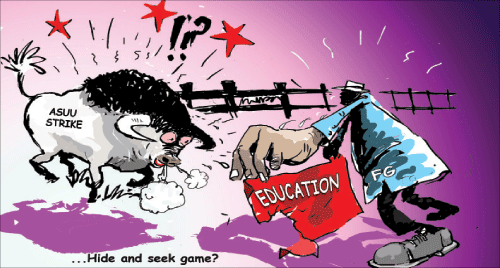 His patience snapped, and he sued the ASUU, as well as eight others.

Mallam Dankano Garba Ahmed, a 71-year-old pensioner from Kano State, in a suit submitted to the National Industrial Court of Nigeria laments that the ongoing strike is negatively affecting his daughter’s education.

The elderly man accuses the union of frustrating his efforts to get his daughter, Zainab Garba Ahmed, a 400 level Civil Engineering student at the Bayero University Kano, out of school within the determined time.

He says that the strike irritates him, as he earns “less than N30,000 as pension,” and, furthermore, has other children he would wish to support financially; this, he states, depends on whether his daughter graduates successfully.

He adds that the strike is making his daughter, who is the second plaintiff, idle, disorganised and psychologically disturbed.

“Her future and that of thousand others across the country are being stagnated strategically by the ongoing strike,” he decries.

The court is asked to determine if the 21 October 2009 agreement, concluded between ASUU and the Federal Government, is valid, binding, and not illegal.

If found otherwise, the pensioner asks the court to define whether ASUU has a right to commence strike for failure or refusal of the Federal Government to implement the said agreement.

He seeks perpetual injunction restraining ASUU from continuing with the strike or taking any action whatsoever and by whatever means to enforce the said agreement or compel the Federal Government to implement it.

The case comes up today, September 18, 2013, at the Kano division of National Industrial Court.