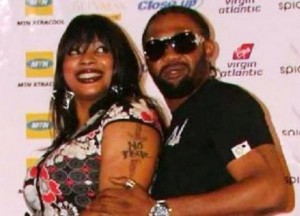 Actress Ayo Adesanya is one of the numerous divorcees in Nollywood.

In a brief interview with Encomium Magazine, her ex husband – Omogoriola Hassan reveals that his marriage to the actress was like boarding a ‘one-chance’ vehicle.

“The biggest lesson I learnt was not to trust anyone. The person you trust may eventually disappoint. Then I was the greatest fool but today I am the wisest and happiest. Marrying Ayo then was like boarding a ‘one-chance’ vehicle. It was like I could never come across a woman I can love like that not knowing I was just being foolish. If not that she had a baby for me, I would have revealed a lot about her. Will just keep them to myself in the interest of our son. But I was agitated when I read that she wants to remove the tattoo on her hand bearing our logo – No Fear. She is free to do but what about the one on her ass where my name was written bold, Omogoriola Hassan? How is she going to remove that? That is stupid of her. If at all you don’t like someone again, that doesn’t mean you need to go to that extent. But believe me she’s still thinking about me because if she’s not she wouldn’t be thinking about removing my tattoos on her body”.