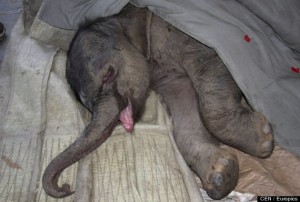 A baby elephant cried for five hours after his own mother attacked and abandoned him at a zoo in China.

Shortly after the mother elephant gave birth to the calf in August at the Shendiaoshan Wild Animal Nature Reserve in Rongcheng, China, she stepped on him, according to Metro U.K. Veterinarians hoped it was an accident and treated the baby before returning him to the mother, but he was attacked again. So they removed him from her.

“The calf was very upset and he was crying for five hours before he could be consoled,” an employee said, per Metro. “He couldn’t bear to be parted from his mother and it was his mother who was trying to kill him.”

Photos taken of the crying baby elephant, named Zhuang Zhuang, show tears streaming from his red eyes and down his face. In one shot, he is seen laying under a blanket while he appears to weep.

Zoo employees have been caring for the injured baby elephant, and he is said to be doing better, according to The Huffington Post’s translation of a Shandong TV report. The mother has exhibited a loss of appetite and may be depressed.

The University of California, Santa Barbara has delved into the question of whether elephants really cry, stating that it depends on which definition of “crying” is being used.

And there is evidence they do. Elephants are known to be highly expressive creatures, according to PBS. They are known to show a wide array of emotions, from joy and rage to grief and compassion.

Elephants show joy when playing and greeting others by trumpeting and flapping their ears. When a baby is born, females can sometimes be heard bellowing and blaring, according to PBS. Elephants are widely known for expressing grief after the loss of a loved one, similar to humans. They mourn the dead by touching the bones or circling the body. Some researchers have suggested they may even relive memories and equate such an interest in the dead with evidence they have a concept of death itself.