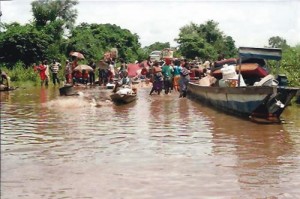 The Benue State government has said with the extent of flooding predicted to hit the State this year, at least N3 billion would be needed to control and mitigate the expected devastation.

Making the revelation on Friday, while fielding questions from newsmen in Makurdi, Benue State Commissioner for Information, Justin Amase said “though we got the sum of N500 million from the federal government, the amount was like a drop in the ocean. “From available statistics, the state government would need close to N3 billion to tackle some of the challenges in the aftermath of the flood, that was what prompted the decision of the state executive council to opt to invest the money in the provision of infrastructure and amenities in the devastated communities.

“Some persons have questioned the wisdom in the decision of the state government, but the truth is that if the government had decided to share the money among the victims, none of them would have gotten more than N2,000.

“That would have amounted to nothing to a people who lost valuables and property in that unfortunate disaster; hence the decision of the executive council to seek a better way of availing our people a reasonable form of palliative.

“It may also interest you to know that outside the N500million relief donation from the federal government, Benue state government also made a counterpart contribution of N500million in order to boost the fund.

“That is the more reason why I insist that it is not fair for anyone to ignorantly insinuate that the money has been misappropriated by the government when in actually sense the state government is making additional funds to aid work in the affected communities.”