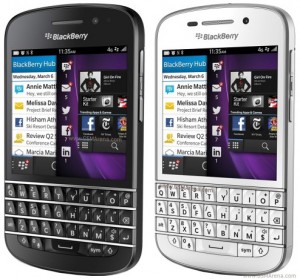 BlackBerry, once the biggest name in mobile and worth more than $200 billion at its peak period in 2007, may soon be sold for less than $5 billion, according to a statement issued by the former smartphone giant.

BlackBerry on Monday said it has signed a Letter of Intent to sell the company to a group of investors led by a Canadian insurance company, Fairfax Financial Holdings Limited for $9 per share, in a deal that would total $4.7 billion. Fairfax currently owns about 10 percent of BlackBerry’s shares.

Trading of BlackBerry’s stock was halted last week when the company announced that it had more than $1 billion in unsold inventory, planned to layoff half of its workforce, and would soon exit the consumer smartphone business, and when trading resumed, the stock rose over 2 percent to $8.95. Prior to the announcement shares in the troubled smartphone maker company were down more than 5 percent for the day.

Fairfax Financial, sometimes called the Berkshire Hathaway of Canada, is a holding company whose primary business is in insurance. It is led by Prem Watsa, a chemical engineer by training who has run the firm since the mid-1980s.

The press-shy Watsa has long been a supporter of BlackBerry, and his name has been linked with a potential buyout for months.

“We can deliver immediate value to shareholders, while we continue the execution of a long-term strategy in a private company with a focus on delivering superior and secure enterprise solutions to BlackBerry customers around the world,” Watsa said in a statement.

Shares in BlackBerry had plunged since Friday, when the company warned of a sharp drop in revenue and massive job cuts. The group has until Nov. 4 to conduct due diligence.

“If I was a Blackberry shareholder I would jump at it,” said James Faucette, an analyst with Pacific Crest. “They’re actually entering into a period of relative stability. It’s going to be hard to improve things going forward. They’re going to be hard-pressed to find a more willing buyer.

“BlackBerry itself is worth less than he’s offering,” said Faucette.

Brian Colello of Morningstar said based on the company’s disastrous earnings warning last Friday, “I think a deal had to happen and the sooner the better. This is probably the only out for investors and the most likely outcome.

“The benefit to this sort of takeover is the ability for BlackBerry and the consortium to reinvent the company without public scrutiny. So we won’t see any of these warnings or earnings releases that do nothing but disappoint investors. The company can go ahead with its strategy, as it pleases, that’s a positive.

BlackBerry, which has struggled to compete in the smartphone business, said last Friday it will slash 4,500 jobs, or about 40 percent of its workforce, and expects to post a nearly $1 billion second-quarter loss.

Ironically, the announcement came the same day Apple’s new $199 flagship iPhone 5S went on sale and people were standing in line around the country to buy it. It was trying to compete with new advanced smartphones by Apple, Samsung and other rivals that helped put Canada-based BlackBerry in the current financial bind.

As part of a massive restructuring, the struggling company said it set targets to reduce its operating expenditures by approximately 50 percent by the end of the first quarter in fiscal 2015.

Fairfax’s acquisition of BlackBerry is contingent on a due diligence period in which Fairfax will audit the BlackBerry business and finalize a deal. BlackBerry says that it expects to negotiate a deal by November 4, 2013. BlackBerry is allowed to solicit deals from other groups during that period and would pay a penalty of 50 cents per share if it breaks away from the sale.