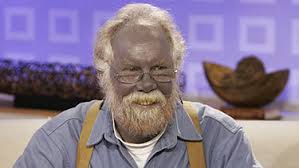 Paul Karason, the man whose skin turned permanently blue 15 years ago, died in Washington on Monday.

Paul Karason, who became famous after his skin turned permanently blue, died at a Washington hospital Monday. He was 62.

Karason was admitted in the hospital last week after suffering a heart attack. He also had pneumonia and later suffered a severe stroke, his estranged wife, Jo Anna Karason, said Tuesday.

Karason was born a fair-skinned, freckled boy but his skin began turning blue 15 years ago after he contracted a rare medical syndrome known as argyria or silver poisoning from dietary supplements.

He was reportedly using a special silver-based preparation to treat a bad case of dermatitis. He had also been drinking colloidal silver.

Jo Anna Karason said some people started calling him “Papa Smurf” after his skin changed color. His white mane and long beard added to the resemblance.

“That was a nickname he didn’t appreciate, depending on who said it,” she said. “If it was a kid who ran up to him saying ‘Papa Smurf,’ it would put a smile on his face. But if it was an adult, well ….”

In 2008 a blue Karason emerged from reclusion and explained his condition on the TODAY show.

“He has been too ill to work for a while,” his wife said. “He didn’t like to go out in public much — only when he thought he needed to, like to go to the bank or to pick up tobacco.”

Karason’s ultimate cause of death as not yet been revealed.