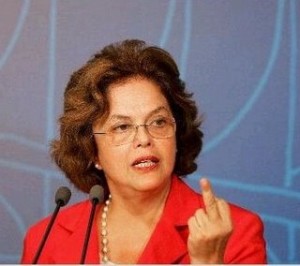 Brazil’s president has postponed a state visit to Washington in response to US spying, and has ordered a series of measures aimed at greater Brazilian online independence and security.

President Dilma Rousseff says she’s not making the trip next month, which was to include a state dinner.

Rousseff has been angered reports based on leaked National Security Agency documents, which show her communications with top aides were intercepted.

The NSA espionage program also targeted state-run oil company Petrobras and also spied on Brazilians who entrusted their personal data to US tech companies such as Facebook and Google.

Brazil reportedly has been the top Latin American target for spying, with data on billions of emails and telephone calls swooped up in NSA programs.

Internet security and policy experts say the Brazilian government’s reaction to information leaked by former NSA contractor Edward Snowden is understandable, but warn it could set the Internet on a course of Balkanization, as Brazil plans to divorce itself from the US-centric internet over Washington’s widespread online spying.

It cited a “common understanding” between Brazil and the European Union on data privacy, and said “negotiations are underway in South America for the deployment of land connections between all nations.” It said Brazil plans to boost investment in home-grown technology and buy only software and hardware that meet government data privacy specifications.

But Rousseff was demanding a full public apology from Obama for the spying, which she didn’t get.