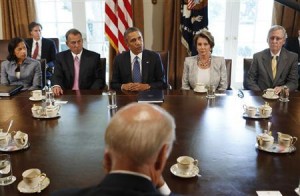 As the world awaits the outcome of US President Barrack Obama’s planned appearance before the US congress over military action in Syria, Obama won his first major victories on securing Congress support for strikes on Syria, with senior members on both sides of the House of Representatives saying they would back him.

The House speaker and top Republican in Congress, John Boehner, said on Tuesday that he would support the president’s motion for strikes against the regime of Bashar a-Assad for the alleged use of chemical weapons, and called on his party colleagues to support the president.

“We have enemies around the world that need to understand we are not going to tolerate this type of behaviour,” Boehner said.

Meanwhile Nancy Pelosi, the Democratic Party’s leader in the house, said she did not believe Congress would reject Obama’s call, and that Assad’s action was “behaviour outside the circle of civilised human behaviour and we must respond,” she said.

She did however say that the public needed to hear more of the intelligence gathered against Assad.

The politicians’ statements came after a meeting at the White House, where the president said he was confident of securing Congress support.

Obama called for a prompt vote by the Congress and reiterated that any US action would be limited in scope and not a repeat of Iraq or Afghanistan.

“What we are envisioning is something limited. It is something proportional. It will degrade Assad’s capabilities,” Obama said.

“At the same time we have a broader strategy that will allow us to upgrade the capabilities of the opposition,” he said.

Obama said he was willing to address concerns among politicians about the motion to authorise the use of force that the White House sent to Congress. “I am confident that those concerns can be addressed,” he added.

“I would not be going to Congress if I wasn’t serious about consultations and believing that by shaping the authorisation to make sure we accomplish the mission, we will be more effective.”

Asked whether he was confident Congress would vote in favour of a strike, Obama said: “I am.”

Obama reiterated his “high confidence” that the Syrian government used chemical weapons against its people on August 21 in a Damascus suburb.

Later on Tuesday, the UN secretary-general Ban Ki-moon said that military action was only justified if in self-defence or with a UN mandate.

“The use of force is lawful only when in exercise of self-defence in accordance with Article 51 of the United Nations Charter and, or when the Security Council approves such action.”

But he said the UN Security Council should unite if it was proved that chemical weapons were used in Syria by any side.

“If confirmed, any use of chemical weapons by anyone under any circumstances will be a serious violation of international law and outrageous war crime,” he said in a video statement. “Any perpetrators must be brought to justice. There should be no impunity.”

A team of UN inspectors is currently analysing samples taken from affected areas of Damascus.