Two Nigerian policewomen  attached to the Traffic Unit of Makinde Police Station, Mafoluku, Lagos, caught on camera demanding and receiving a bribe of N100 from a commercial driver along the Apapa-Oshodi expressway in Lagos will soon know their fate as the Police Provost Unit of the Lagos Police Command has concluded their orderly room trial. 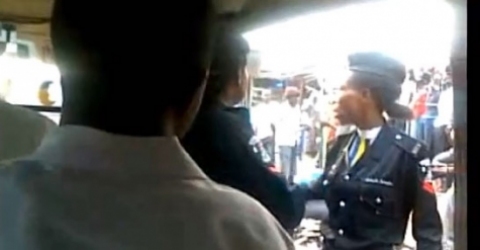 It was learnt that the husband of one of the policewomen has appealed to the police authorities to release his wife from detention as well as forgive her for the offence she had committed.

A source in the police station identified the women as Corporals Elizabeth Itona and Jenifer Azingbe, stating that “We heard they have finished orderly room trial for them today (Monday).”

The source told revealed that Corporal Azingbe is being detained with her seven-month-old baby identified as Nathaniel.

According to him, “Corporal Jenifer is breast feeding her baby and she is in detention with him. The baby is seven months old and that is why the husband and her people came to plead for her release.”