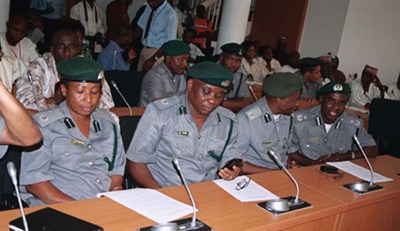 The Ports and Terminal Multiservices Ltd. (PTML) Command of the Nigeria Customs Service (NCS), Tin-Can Island, Lagos, said on Tuesday that it had intercepted a container laden with two cars containing arms and ammunition.

Mr Tajudeen Olarewaju, the Customs Area Controller (CAC) told newsmen in Lagos that the vehicles, a 2004 model Chrysler 300 with chassis No 629127 and a 1999 model GMC Suburban with chassis number 764650 containing the ammunition, were intercepted during customs examination.

He said that the arms and ammunition were found inside the cars placed in the container No 8071808.

“The items turned out to be arms and ammunition – One Smith and Wesson short gun, one revolver and one bush nail sniper rifle model 710,’’ Olarenwaju said.

The controller said that 52 rounds of 38mm caliber and 48 rounds of 9mm caliber were impounded in the cars.

He said that other arms found in the cars were 38 rounds off 9.9mm caliber and two empty magazines (firearms).

According to the controller, two staff of Chimbudike Agency -the clearing agent- have been arrested in connection with the seizure.

Olarenwaju said that nobody was authorised to import such items without permit.

He warned smugglers against bringing in such items through the PTML, adding that the customs officers would hunt them down. (NAN)