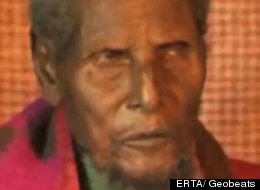 Anyone who sees Dhaqabo Ebba will agree the Ethiopian farmer is very old.

But just how old is a matter of debate.

Ebba himself says he’s a whopping 160 years old, even though there is no birth certificate to prove his claim, according to Opride.com

Ebba made the statement in a video for Oromiya TV. The reporter was so impressed by his knowledge about local history, that he was convinced that the retired farmer must be 16 decades old.

The reporter was especially impressed by Ebba’s alleged memories of Italy’s 1895 invasion of Ethiopia.

“When Italy invaded Ethiopia I had two wives,and my son was old enough to herd cattle,” Ebba said, according to Mohammad Ademo, who translated the story for Opride.com

If Ebba’s age can be verified, he would be the oldest person ever recorded, beating out the previous record holder, Jeanne Calment, a French woman who was 122 years old when she died

Currently, Guinness World Records recognizes 114-year-old Misao Okawa as the world’s oldest living person, but there are others who, like Ebba, may be older.

Last month, Carmelo Flores Laura of Bolivia claimed he was 123 years old, a fact backed up by public records listing his birthdate as July 16, 1890.

However, Laura has never officially filed a claim with Guinness, according to spokeswoman Jamie Panas. His listed birthdate is based on his baptismal record, not a birth certificate.

Ebba grew up in a society with an oral tradition of record keeping, so there is no paper trail and no living witnesses who verify his age.

“Not even one of my peers is alive today,” Ebba said, according to Opride.com

Medical technology might be able to confirm Ebba’s age, and Ademo says plans are in the works to examine him to see if the claims are true.

Even if Ebba is never confirmed as the oldest man who ever lived, he can find joy in other things, such as the fact that he still has more teeth than his oldest son, Hamid.