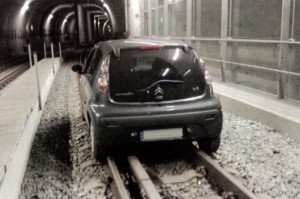 This bizarre image shows what happened when a drunk driver mistook a railway tunnel for a roadway.

The 27-year-old’s Citroen is seen wedged over the rails after he was stopped by police.

The driver had followed the lines until he suddenly came to the tunnel entrance.

But instead of stopping, he drove on and even passed an underground station without pause.

Martin Huber carried on driving through the tunnel in Bochum, Germany, before seeing police in front of him.

Realising his mistake, the dopey driver got out of the car and was arrested.

Luckily for him the trains and trams had stopped for the night.

Police found him to be more than three times over the drink driving limit, his license was confiscated. He faces drink driving charges.

A train had to be used to tow his car out of the underground tunnel.