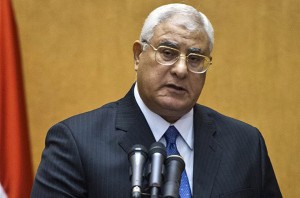 Egypt’s interim president has defended the military’s removal of former President Mohamed Morsi and said his government’s top priority is to restore security.

In his first interview since he took office, Adly Mansour on Wednesday said that Egypt was “moving towards democracy” and that the country’s was sticking to a military-backed road map for transition after the July 3 coup.

Mansour said Egypt’s interim government is charging ahead with a transition plan, appointing a committee to review the constitution passed under Morsi.

A new version is to be put to a popular referendum within two months, and if passed, it would open the way for presidential and parliamentary elections.

“The state, with all its agencies, will not allow any party to prevent it satisfying the aspirations of the people,” he added.

Mansour defended reinstating emergency laws in the meantime, and said that his government would not hold reconciliation talks with any individuals who have incited or taken part in acts of violence.

The interview aired on the same day that a military tribunal issued verdicts against supporters of Morsi and a court ordered channels perceived to be sympathetic to the former regime off the air.

State media has frequently accused Morsi’s Muslim Brotherhood group and their supporters of carrying out acts of “terrorism” and attacking police stations, churches and government buildings.

In the past several weeks, many leaders and members of the Brotherhood have been detained and face prosecution on charges ranging from inciting violence to possession of weapons and murder.

Morsi’s backers say the new leaders are relying on security forces and a corrupt system to go after the group to avoid finding a political solution or compromises to the crisis.

Morsi himself has been held in an undisclosed location since his July 3 ouster.

Mansour in his interview also called for a political solution to the ongoing conflict in Syria “that protects the unity of Syria and puts it on the path to democracy”.

“Egypt condemns any use of chemical weapons but it is important to wait for the results of the inspector’s report regarding this issue to reach a conclusion of who has actually used these weapons,” Mansour told to state television.