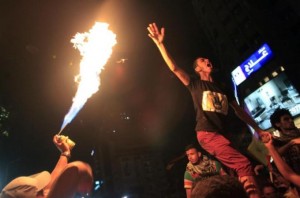 Egypt’s interim president, Adly Mansour, said that a plan for a return to civilian government after the army’s removal of deposed President Mohamed Morsi was on track despite “challenges” and that emergency law should be lifted soon.

His comments were broadcast after thousands of Islamists took to the streets in towns and cities across Egypt on Tuesday evening to denounce the new military-backed government and demand Morsi’s return – their second show of mass support in four days.

The interim ledership has launched a furious crackdown on Morsi’s Muslim Brotherhood since toppling Egypt’s first freely-elected president on July 3 after huge protests.

It has accused the group of terrorism, sent its top leaders to trial on charges of inciting violence or murder and violently crushed protest sit-ins in Cairo, killing hundreds.
An Egyptian military court on Tuesday sentenced 11 Muslim Brotherhood members to life in prison for violence against the army in the port city of Suez last month.

Mansour said in an interview with state television that his decision to announce emergency law that day had not been easy, but “terrorism and the vicious war that was being waged by some of the extremists made it crucial”.

If a “gradual improvement in security” continued, the state of emergency should end as planned in mid-September, he said.

Mansour also said a “road map” back to democratic rule, under which the constitution is to be amended, followed by parliamentary and presidential elections early next year, remained on track: “God willing, we will commit ourselves to the timeframe in the coming stages.”

“There are no alterations on the priorities of the plan, even though there are some challenges facing us.”

Although the army-backed interim government has begun to revive the political-security apparatus that was shelved, but not dismantled, after the 2011 revolt that overthrew Hosni Mubarak, Mansour said there would be no return to the days of political police.

“The role of the security apparatus of Egypt is now limited to protecting security and protecting the people … In terms of political issues, there is no longer a role in that,” he said. “That was a period that Egypt passed through and it will not return … I assure you of that.”

Shortly before the interview was aired, supporters of the Muslim Brotherhood turned out in cities in the Nile Delta, in Upper Egypt, along the Suez Canal, as well as in the capital, to mark exactly two months since Morsi was toppled.

There were no reports of violence at Tuesday’s marches, a contrast to nationwide protests last Friday, which resulted in a scattering of clashes with security forces, notably in Cairo, and at least seven deaths.

The Brotherhood says it is committed to peaceful protest, and that the accusations are a pretext for a crackdown by a “putschist regime” trying to eliminate Egypt’s oldest political group. [Reuters]