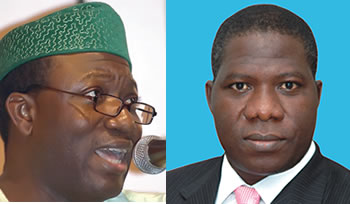 Governor of Ekiti State, Dr Kayode Fayemi has said the member representing Irepodun-Ifelodun Constituency and leader of the State Caucus in the House of Representatives, Hon Opeyemi Bamidele, is free to contest the 2014 governorship election.

Bamidele’s declaration of his ambition to contest the defunct Action Congress of Nigeria (ACN), now All Progressives Congress (APC) gubernatorial ticket against the incumbent did not go down well with chieftains of the party including Senator Ahmed Bola Tinubu, who publicly gave his blessings to Gov. Fayemi’s re-election bid come 2014.

However, Fayemi, in a statement yesterday by his media aide, Mr. Yinka Oyebode, advised the federal lawmaker to pursue his ambition within the limits of the laws.

Fayemi was reacting to last Thursday’s disruption of a pro-Bamidele rally in Ado-Ekiti, the state capital by the police which the lawmaker blamed the governor of instigating.

The governor said over 10 Peoples Democratic Party (PDP) aspirants had declared their interest to vie for the governorship election in the state and none of them was molested by the government.

While taking exception to Bamidele’s allegation that the government was behind the disruption of his rally, Gov. Fayemi noted that it was “strictly a police affair.”

The state police command had while justifying its disruption of the rally, said it contradicted “Section 99 of the 2010 Electoral Act (as Amended) which forbids political campaigns 90 days before election.”

Gov. Fayemi further added that it was the responsibility of the police to determine actions and situations that could cause a breach of peace and safeguard the country.

The statement reads: “A lot of misrepresentations have been peddled in the media about the events of last Thursday and it is important to state clearly that the governor has no plan to stop Bamidele or anybody from declaring interest in the governorship election.

“It is on record that over 10 aspirants have made public declaration of their interest in the race and none of them was harassed for doing so. If the police have an issue with Bamidele’s approach, the most honourable thing for him to do is to comply with the laid-down procedures, instead of resorting to the blame game and name calling.

“Ekiti remains one of the most peaceful states in the country and the cooperation of all is needed to sustain the peaceful atmosphere and the tangible development across the state.”

Meanwhile Bamidele has insisted that he would not be intimidated into withdrawing from the race not after the “show of solidarity” by Ekiti people with his aspiration.

According to him, “We have passed the stage of contemplating withdrawal from the race. As far as I am concerned, the declaration was perfectly done. I had my own programme, but God had His own. My opponents also used their own programme to further announce me. When you enjoy the favour of God, even your enemies will announce you. I experienced that on Thursday and I give God all the glory.”