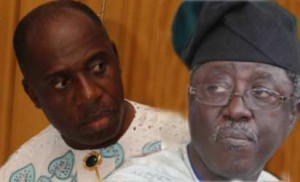 In a bid to douse the political tension in the country as well as grapple with the aftermath of Nigeria Governors Forum (NGF) election in May, the Senators Forum of Nigeria paid Rivers State Governor and Chairman of NGF, Chibuike Rotimi Amaechi a visit at the Government House in Port Harcourt, the state capital on Tuesday.

The association made up of both serving and former senators was led by its acting chairman, Senator John K. Brambaifa, who expressed worry over the recent turn of events in the country’s political sphere.

“Your Excellency, you may wonder why the Senators forum has chosen to visit your state at this time. As major stakeholders, members of the forum are very concerned about the current challenges in the country,” he said.

“Accordingly, we deem it pertinent to seek your kind permission to intervene for quick resolution of disputes that are likely to threaten our national polity and peaceful co-existence.

“You will recall that the Senate and indeed the National Assembly had cause in the past and even more recently, to intervene on some issues and challenges to our national unity, growth and development. The Forum, in discharge of its mandate, had resolved to consult major stakeholders in the country with a view to strengthening and consolidating our democracy.

“It is in the light of this resolve that the Forum, through our letter dated August 21st 2013, wrote seeking audience with your Excellency to discuss matters of urgent national importance, with a view to bringing down the political tempo and douse the tension”.

“Your Excellency, it may interest you to note that the Forum has already met with your colleague, Governor David J. Jang of Plateau state recently and had very fruitful discussion. Your Excellency, our consultations are ongoing and we will not rest until our dear nation achieves greatness through democracy and good governance. We thank you most sincerely for your courtesy, hospitality and kind attention”.

The senators also reserved some praise for Amaechi over his developmental strides evident in the state saying, “While traversing your state, we have noticed positive developmental changes. We commend your efforts and trust that it shall continue to the satisfaction of all and sundry. For with peace, comes progress and development”.

In his response Amaechi said, “I thank you for coming. It shows how patriotic you are that you think that anything that will scuttle democracy or affect the progress of democracy in Nigeria must be addressed. You are not under any obligation to sort out anything happening in the Nigeria Governors’ Forum.

“I thank you for visiting my friend, the Governor of Plateau State. Like you know, he did not win the election and if he was sincere he should have confessed to you that he did not win the election. I hope that when you visited him, you encouraged him to uphold democracy because democracy is about elections and it is about a party accepting victory and another party accepting defeat and working together for the progress of the institutions for which they have decided to compete or contest to administer.

“I must acknowledge that you have been very honest and patriotic and that the God we worship will bless all of you,” the governor added.