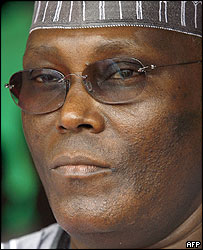 The Arewa Consultative Forum, ACF, has been warned by to call former Vice President Atiku Abubakar to order over his alleged plot to rob President Goodluck Jonathan of a second term in office.

In a statement, yesterday, in Port Harcourt, Rivers State, by ex-militant commanders in the Niger Delta region, under the aegis of Leadership, Peace and Cultural Development Initiative, the ex-militant leaders called on ACF to advise the former Vice President to leave President Jonathan alone, so that he can concentrate on governance.

Spokesman of the ex-militants, ‘General’ Reuben Wilson, however said they would resist moves by Atiku against Jonathan’s alleged second term bid.

“ACF should advise Atiku and other power hungry Northern elements to leave Jonathan alone. Jonathan has been in office for just two years and they have done everything possible to make sure he does not concentrate on developing the country. The ACF should not provoke us. Where were they when their son, Muhammadu Buhari promised hell for Jonathan?

“All this while that the Boko Haram warlords have been killing and maiming our people in the North, where was ACF? Why have they not called Baraje and Atiku to order? Why can’t they talk to their children to leave Jonathan alone? The ACF may have closed their eyes to the devilish acts of their Boko Haram brothers, but this country will remain together and Jonathan will be re-elected in 2015.

“Your Boko Haram people have not allowed Jonathan to remain focused. Your northern brothers, who believe that the Presidency is their birthright are doing all they can to distract him and they expect us to keep quiet. When the North held sway for over three decades, they had the support of the South.”

The ex-militant commanders also called on Nigerians to ignore recent comment credited to Jomo Gbomo of Movement for Emancipation of Niger Delta, MEND, saying nobody goes by such names.