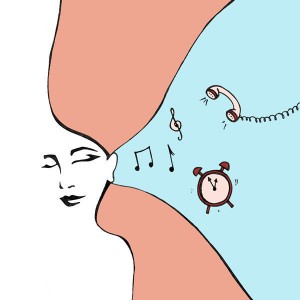 When we’re sleeping, our bodies do everything they can to stay asleep. So rather than waking us up, outside stimuli — smells, sounds, sensations — often become woven into our dream narratives. “The dreaming mind has this really cool way of seemingly flawlessly incorporating the outside interference into the storyline of the dream,” explains Lauri Loewenberg, a certified dream analyst and member of theInternational Association for the Study of Dreams.

Which means that there are a lot of influences that can shape how your dreams play out. Just keep in mind that your natural dreams, i.e. those that aren’t at the mercy of what’s happening around you in the real world, help you process your thoughts and feelings about your day. Too much interference, Loewenberg says, “can be disruptive to the message your dreaming mind is trying to give you.”

If you’ve ever incorporated the sound of your alarm clock into your dream — maybe it became a fire alarm or a whistle — you know that real-life sounds can find their way into your dreams’ storylines. An app even monitors sleep and plays sounds specifically designed to evoke certain dreams. Loewenberg attests that soundtracks can influence the content of your dreams, and while she doesn’t recommend making a habit out of this — again, it interferes with the cognitive work your dreams are meant to accomplish — she says that “it’s OK, once in a while, if you want to influence a really awesome dream, to play your favorite album quietly while you sleep. Or maybe the sound of the ocean, if you want to dream about a romp on the beach with Ashton Kutcher.”

In a small 2008 study, German researchers introduced either a positive smell (roses) or a negative smell (rotten eggs) when women entered rapid eye movement, or REM, sleep — a prime time for dreaming. When the women were woken up, they were asked about what they’d dreamt. Smelling roses yielded positive dreams, while smelling eggs yielded negative dreams.

Loewenberg explains that if you smell flowers, chocolate or perfume when you’re awake, it tends to evoke positive emotions, so it makes sense that the dream would follow a similar pattern. But there’s a biological explanation, too: “The limbic system part of the brain that controls the ability to receive smell also receives emotions,” she says.

OK, here it gets a little wacky: A recent study out of Hong Kong found that sleeping on your stomach increases the chances you’ll have a sexual dream — or a dream about being persecuted. The examples of themes mentioned in the study include “having a sexual relationship with a big wheel or celebrity,” “being smothered, unable to breathe,” and “being tied, unable to move.”

Which all makes sense: When you’re on your stomach, your genitals are in contact with the bed—i.e., they’re stimulated — and it’s harder to breathe, just like when you’re having sex … or being suffocated. One more tidbit about sleeping position: The best way to remember your dreams is to stay in the same position you were in when you woke up. “That’s really all it takes to be able to start remembering your dreams,” says Loewenberg. “Don’t move — stay put.” And if you wake up to go to the bathroom and want to re-enter the dream you were in the middle of, try getting right back into the position you were sleeping in before getting up.

4. Your State Of Mind

Not surprisingly, your mental state — not just what happens to you and around you — has a huge impact on your dreams. Depression, for example, can influence your dreams’ color palettes. “I’ve found in my research that if you have a dream that’s in black and white or where the colors are muted or it’s in shades of gray, that can be a symbol for depression,” Loewenberg says. (Depression, however, also suppresses dream recall.)

Loewenberg explains that the weather patterns you dream about are connected to your mind frame, too: Anxiety brings tornadoes, which represent “spinning out of control”; a clear, calm mind tends to dream of sunny days; and depression and sadness can bring rain. “Weather in dreams is very much connected to your emotions in real life,” she says.

Ever wonder why you’re haunted by pizza and ice cream in your dreams when you’re trying to lose weight? “Whenever you quit something — drinking or smoking or even just cookies — you’re going to dream about it,” Loewenberg says. That is, if you diet or cut out sugar, your dreams are likely to feature a delectable buffet of treats. People who quit smoking tend to have dreams about smoking for the first couple of years afterward stopping the harmful habit — and some are visited infrequently by such dreams even 30 years later, Loewenberg says.

There’s a whole host of ways in which pharmaceuticals can influence your dreams. “A lot of prescription meds affect REM and can really make your dreams crazy,” Loewenberg says.

Nicorette, for example, tends to give people intensely vivid dreams. Drugs can also affect dream recall: Since depression makes you less likely to remember your dreams, anti-depressants can counteract that effect. Vitamin B6 has also been shown to help people remember their dreams more vividly and easily.