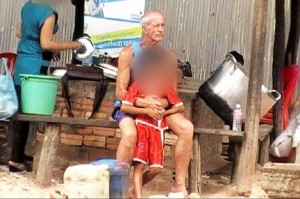 The innocent lad, wearing a Manchester United shirt and shorts, recoils as the leering Brit nuzzles his neck – and his hands wander down to the boy’s groin.

This shocking scene highlights the evil of UK perverts shopping for child sex where they can find easy prey, far from the reach of British police.

Blakeley, 71, tried to excuse his vile behaviour when he was confronted by child protection expert Mark Williams-Thomas on his return to Britain. But other British men, lusting for sex with exploited minors, still trawl the seedy Riverside district of Cambodia’s capital Phnom Penh where shameless pimps offer youngsters for abuse.

An undercover investigation by Mr Williams-Thomas – who revealed the full extent of the Jimmy Savile scandal – found how disturbingly simple it is to “buy” girls and boys for sex.

Mr Williams-Thomas, who posed as a British tourist seeking perverted pleasures, said: “Within minutes of getting to the Riverside we were approached and offered young girls. It was sick.

“The ease with which the drivers of the local tuk-tuk auto rickshaws offer girls for sex is shocking. All the westerners there know how to find girls.”

An ITV1 documentary called Exposure: Predators Abroad will this week show a tuk-tuk driving pimp called Kinsam ring a contact who he says he can provide Mr Williams-Thomas with very young girls – for the right price.

“You want a young girl, right?” says Kinsam. “I have some but it’s expensive. The young girls not stand on the street – have to contact someone.”

A middle-man called Bo says he can have a 10-year-old girl available within an hour – and even offers to bring the would-be victim to the investigator’s hotel.

The man reassures Mr Williams-Thomas he will not be caught by cops, saying they “don’t care” about child sex trafficking.

Chillingly, Bo boasts of his skill in arranging child sex for white, middle-class men, telling the former Surrey detective: “I do it every time with customers that look like you.” Later, the pimp rings the “punter” and offers him two girls aged nine and 10 for 800 dollars – about £500.

Mr Williams-Thomas launched his two-week investigation after being horrified by cases of Brits travelling to Cambodia to seek children. Gary Glitter lived in the country for three years until he was deported in 2002 for suspected child abuse.

Experts say devious predators targeting Cambodia’s children have developed a worrying new tactic. They claim they want to help the south-east Asian nation by teaching youngsters English or setting-up an orphanage or charity.

But once inside the paedophiles’ ­paradise, they use their roles as a cover to groom and abuse helpless children.

Investigators believe Blakeley taught children so he could have easy access to potential victims. Undercover footage shows the pensioner – who has visited Cambodia at least eight times – swimming with boys and girls in a river in the north-west Siem Reap province.

Blakeley, originally from Poole, Dorset, is also pictured squatting on a bench in a tatty blue vest as he fondles a boy’s chest while the lad, aged about 10, sits between his legs. He appears to kiss the boy’s head and buries his face in his neck.

Blakeley was convicted in Cambodia last year of committing indecent acts against five children, the youngest only seven. He was sentenced to just two years in prison – one suspended. One victim says Blakeley abused him and gave him 2,000 Riels – about 30p.

The TV documentary tells how Mr Williams-Thomas tracks down Blakeley after he returns to Britain. When the investigator confronts him in Torquay, Devon, where he is staying at a bed and breakfast, Blakeley despicably tries to justify himself. He says: “I hold them. Cambodian children especially are very, very affectionate and they come leaping up and sitting on my lap and some kiss me. That’s not indecent assault. What’s indecent about holding a child?”

He adds: “If they actually kiss me then of course I suppose they just want a kiss back. Obviously with kissing they’d only be up to 10 or 11 years old maximum. You wouldn’t do it to an older child because they wouldn’t do it to you.”

Mr Williams-Thomas fears Blakeley will return to Cambodia or a country with similarly slack child protection.

The expert believes it is far too easy for paedophiles convicted in the UK to visit countries like Cambodia, Vietnam and Thailand where they can rape and molest children. The 2003 Sexual Offences Act introduced foreign travel orders to ban abusers convicted in the UK of going abroad for up to five years. But only 45 orders have been issued in seven years.

So paedophiles monitored in Britain through the Sex Offenders’ Register are still free to abuse children abroad.

Mr Williams-Thomas said: “That is woeful. We need legislation so offenders forfeit the right to travel.”
How I tracked the evil trade: By Mark Williams-Thomas:

I’ve seen some horrendous stuff in my life – but it was tough posing as a paedophile in Cambodia to see how easy it is to arrange child sex.

It meant speaking to people who were clearly interested in children themselves or involved in finding youngsters for others to abuse. I did it to protect and rescue potential victims – and get offenders nicked.

Two very young girls might have been taken from their beds and brought to us. We had to ensure that didn’t happen. Our concern was always for the children’s safety. But we also needed to gather as much evidence as possible.

We managed to identify child sex traffickers and handed evidence to Cambodian police. They are now on the case, proving the investigation for TV was worth it.