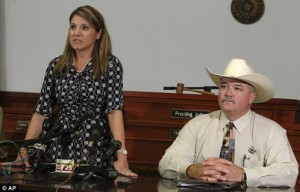 A Texas father who discovered a man raping his five-year-old daughter and beat him to death with his bare hands will not be charged with homicide under state law.

A Lavaca County grand jury decided not to press charges against the 23-year-old father in the June 9th death of Jesus Mora Flores, 47, who was killed inside a remote shack after he was caught molesting the young girl.

Under Texas state law, deadly force is authorized and indeed, justified in order to stop an aggravated sexual assault and coupled with the fact that the harrowing 911 calls made by the father back claims he even tried to save the pedophile’s life led to the grand jury’s decision.

Lavaca County sheriff’s deputies said that the father, whose name has not been released to protect the little girl’s identity, sent her and her brother to feed the family’s chickens.

The boy rushed back to tell his dad that someone had grabbed his sister and taken her to a small secluded shack and the father rushed towards his daughter’s screams and arrived to find them both with their underwear off.

Flying into a rage, the father beat Flores unconscious, but attempted to call 911 for the rapist after he had made sure his daughter was safe.Sheriff Micah Harmon had said in June that he was not willing to press charges against the father, rather the case would be presented to a grand jury. At the time, Harmon said that the man was ‘very remorseful’ and didn’t know at the time he had killed Flores.

‘You have a right to defend your daughter,’ Harmon told CNN at the time. ‘The girl’s father acted in defense of his third person. Once the investigation is completed we will submit it to the district attorney who then submits it to the grand jury, who will decide if they will indict him.’

Indeed, the father is heard profanely screaming at a dispatcher who couldn’t locate the property.
Becoming increasingly frazzled, the father at one point tells the dispatcher he’s going to put the man in his truck and drive him to a hospital before sheriff’s deputies finally arrive.V’Anne Huser, the father’s attorney, sternly told reporters several times during a news conference at the Lavaca County courthouse that neither the father nor the family will ever give interviews.
‘He’s a peaceable soul,’ Huser said. ‘He had no intention to kill anybody that day.’

The attack happened on the family’s ranch off a quiet, two-lane county road between the farming towns of Shiner and Yoakum.

Authorities say a witness saw Flores ‘forcibly carrying’ the girl into a secluded area and then scrambled to find the father. Running toward his daughter’s screams, investigators said, the father pulled Flores off his child and ‘inflicted several blows to the man’s head and neck area.’

Emergency crews found Flores’ pants and underwear pulled down on his lifeless body by the time they responded to the 911 call.The girl was taken to a hospital and examined, and authorities say forensic evidence and witness accounts corroborated the father’s story that his daughter was being sexually molested.

‘Under the law in the state of Texas deadly force is authorized and justified in order to stop an aggravated sexual assault or sexual assault,’ District Attorney Heather McMinn told reporters in June.

All the evidence provided by the sheriff’s department and the Texas Rangers indicated that’s what was occurring when the victim’s father arrived at the scene,’ she said. Authorities said he expressed regret at the killing at the time, and no evidence so far has led them to doubt his story. The girl’s grandfather agreed it had been an accident.
‘My son. Sorry,’ the grandfather told the Victoria Advocate in broken English. ‘It was an accident.’
Lavaca County Sheriff Micah Harmon added: ‘He was very remorseful. I don’t think it was his intent for the man to die.’

Residents of the small Lavaca County town were largely in support of the father, saying the victim deserved it.