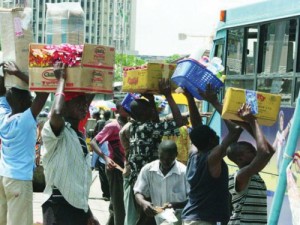 The Federal Capital Territory Administration, FCTA, yesterday disclosed that it arrested 6,586 hawkers from January to September and 467 minors, out of which 4,729 were convicted with 633 sentenced.

The acting Director who also admitted that some of the staff of AEPB engage in sharp practices, said that over seventy of such staff of the agency have been reprimanded to serve as deterrent to others.

She however did not give answers to how much the AEPB has raked in under the period she reviewed, as well as how much the agency spends in cleaning the nation’s capital city, just as she disclosed that the revenues collected were paid to the central Treasury, adding that the AEPB has fourteen lawyers who are civil servants of the FCTA as well as twenty four Magistrates assigned for the assignment by the FCT Judiciary department.

Mrs Adebayo also said that the monthly environmental programme was cancelled because of its failure as residents of the city use the day to stay in their homes and watch home videos, but said that in the House to House programme of AEPB, enforcement for abatement of nuisances in Gaduwa, Yayal Estate, Birnin Kebbi, Yaba Close, Kano Street, among others have been achieved, adding that between January and August this year, a total number of houses inspected were 2,393, 2,146 alleged nuisances abated, 247 court summons served and 157 convicted.