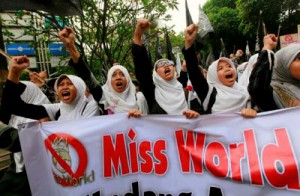 The 2013 edition of the famous Miss World pageant has been scheduled to hold at the Sentul International Convention Center in Jakarta, Indonesia on Saturday September 28th, but if the Muslim women in the country have their way, the event won’t hold.

For several days, members of an Islamic group called Hizbut Tahrir have been protesting against the pageant in Jakarta. The group yesterday converged outside the office of the local organizer of the beauty contest, MNC media group, warning them not to stage the pageant in the city.

Other cities are also holding protests, demanding that the permit to hold Miss World pageant in their country be revoked, saying that the pageant runs against their culture.

MNC Group and Miss World Organization say it’s too late to find a new location but promised that contestants would not be allowed to wear bikini at the event.

Same thing happened in Nigeria in 2002.