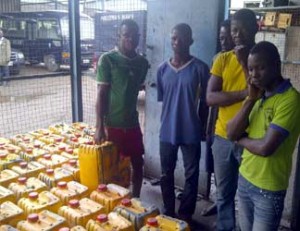 The Nigerian Navy Task Force has arrested five foreign nationals, who allegedly specialised in conveying petroleum products from pipeline vandals to Benin Republic, have been arrested in Badagry area of Lagos State.

The suspects, comprising four teenagers from Benin Republic and a 50-year-old Ghanaian, were reportedly arrested while conveying 113 50-litre jerrycans filled with petroleum products.

Administration Officer, NNS Beecroft, Apapa, Commander Hyacynth Nwaka, while parading the suspects before journalists, weekend, said operatives of the Task Force at Atlas Cove, acting on a tip-off, intercepted the suspects at 3.30a.m. and brought them to the base for further investigation.

The suspects claimed they were fishermen based in Seme area of Lagos.

One of them, Andre Tougene, a secondary school student in BeninRepublic, told Vanguard that they were instructed by some persons to convey the product to Seme, where it would be sold to buyers for onward transportation to BeninRepublic.

He claimed to have been tempted by the N4,000 payment he was to get.

The 50-year-old Ghanaian, Nabroda Ajete, said a friend of his told him to bring 30 empty jerrycans to the shore. And that he didn’t know they were going to be used to siphon petroleum products.

The suspects, according to Commander Nwaka, would be handed over to the police. He said that the fate of the one that claimed to be 15 years would be determined by the Police. [Vanguard]