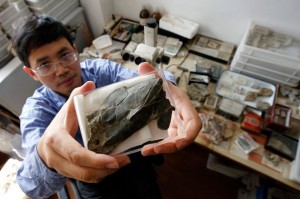 A team of international scientists have found a fish fossil at the bottom of a reservoir that is the oldest known creature with a face.

And they believe it is the “missing link” in the ­development of vertebrates, offering more clues to ­the evolution of humans.

Experts have described the discovery in China as ­“stunning”.

“We now know prehistoric fish gave rise to the modern fish fauna as we know it.”

Fellow palaeontologist Matt Friedman added: “It will take time to fully digest the ­implications of such a ­remarkable fossil, but it is clear that a major reframing of our understanding of early jawed vertebrate evolution is now in full swing.”

The fish they found would have been eight-inches long and armour plated.

It is the most primitive vertebrate discovered with a modern jaw, and includes a bone found in humans.

British fossil expert Matt Friedman said of the creature: “It is the deepest branch of our family tree that bears the kinds of jaw bones found in humans.

“This is an unexpected discovery that inverts ­schoolbook teaching on the evolution of bony skulls.

“Up until now it had been thought the anatomical ­peculiarities of bony fishes, the group that would ­eventually give rise to human beings, are specialisations that arose later in vertebrate evolutionary history in our own bony fish lineage.

“But now that narrative has been turned on its head.”

The fossil was shown off by Professor Min Zhu, one of the team of scientists who found it, in his Beijing laboratory.