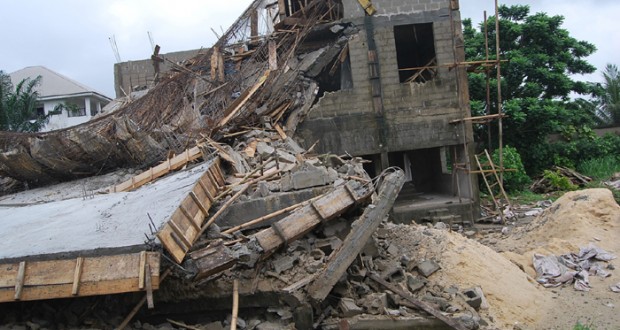 A four-storey building under construction in Onitsha, Anambra, collapsed after a downpour on Wednesday.

The incident occurred at 24 Obanye St. near the Onitsha General Post Office at about 3.30 p.m.

A correspondent of the News Agency of Nigeria who was at the scene of the incident in Onitsha, gathered that no life was lost in the incident.

A witness who spoke on condition of anonymity said that builders and labourers working on the building were not around for work as the downpour started at about 6.30 a.m.

“We heard a heavy sound and as most of the neighbours in the street rushed out, we saw the uncompleted building collapsing.

“It was a big surprise to all of us because we noticed that recently work on the building was going on at a very high speed.

“It is just a pity for such a huge financial loss. But thank God that no one was working in the building today and no one was injured in the incident,’’ he said.

As at the time of this report, the cause of the collapse had yet to be ascertained.

A similar incident had occurred in June.