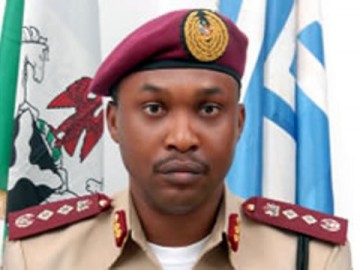 The Federal Road Safety Commission, FRSC, says it will prosecute a Deputy Commissioner of Police in Ebonyi Police Command for allegedly assaulting its officers.

Mr Chika Nwaka, the FRSC Enugu Zonal Commander, said this in Abakaliki on Saturday during a public sensitisation rally held on the use of Speed Limit Devices.

The police chief, DCP Istifanus Shettima, and some officers allegedly assaulted two FRSC officials who were on duty on the Enugu-Abakaliki expressway on Thursday.

Nwaka vowed that the FRSC would pursue the case to a logical conclusion, alleging that Shettima was fond of assaulting FRSC officials.

“This has been a regular occurrence and we are determined to make this incident the last.

“It is absurd for him (Shettima) to allege that the FRSC does not have the constitutional right to operate within the town; that was why he assaulted our officers,” he said.

Nwaka, however, said that FRSC officials should be constitutionally empowered to carry arms, as it would protect them from incessant assaults.

“Lesser security outfits such as vigilante groups carry guns; so, I feel it is high time FRSC officials were empowered to carry arms,” he said.

Mr Onyinyechi Chukwu, one of the assaulted FRSC officers, said that he was assaulted by Shettima while controlling traffic at the Presco Junction axis of the road.

“I did not cause any accident; he just beckoned on me and said that I should be in the office or along the highway and not at the junction.

“When I tried to defend my posting there, he came down from his vehicle and slapped me.

“His men swooped on me and they wanted to put me inside the boot of their vehicle but I resisted, while my fellow officers rushed to the scene,” he said.

“One FRSC officer, who was directing traffic, allowed vehicles from different directions to pass at the same time and this made a tricycle and motorcycle to collide.

“The DCP, who was present at the location with his personnel directed the FRSC official to accompany the victims of the accident to the Police Motor Traffic Division to give statements, and for the injured ones to receive treatment.

“The FRSC officer refused and hauled abuses at the DCP and subsequently assaulted him,” Igbo added. (NAN)