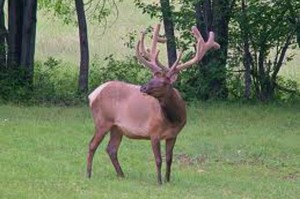 Usually it’s drunk people disturbing the wildlife, but one man in Sweden found himself in trouble with five drunk elk.

The man was blocked from entering his house in Ingaro, an island in Stockholm’s suburbs, by four adult elk and a calf who had gotten drunk from eating rotten apples in his garden.

“Five drunken elk were threatening a resident who was barred from entering his own home,” a police incident report said.

The animals had left before the police arrived, and the homeowner was instructed by officers to clear his garden of fermented apples in order to avoid any future incidents with drunken elk.

Police spokesman Albin Näverberg agreed the man had no option but to call the authorities as the animals posed a big threat.

“They can be really dangerous. They become fearless,” he said

“Instead of backing away when a person approaches, they move toward you. They may even take a run at you.”

This is a reoccurring problem for Swedish police, who see dozens of calls about drunken elk in the autumn.

Näverberg said: “If there is a lot of fermenting fruit, then we get a lot of calls about drunken elk. But most often they’re gone before officers arrive.”