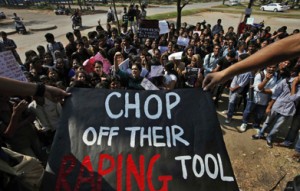 Four men convicted in the December gang r*pe and murder of a young New Delhi woman on a bus, have been sentenced to death by an Indian court.

The death sentence, handed down today, must be confirmed by India’s High Court.

The men can appeal their case to the Supreme Court, and ask the president for clemency.

“In these times when crimes against women are on the rise,. court cannot turn a blind eye to this gruesome act,” he said.

All the four suspects were teary eyed as they entered the cramped room dressed more smartly than on Tuesday when they were convicted of a string of charges including murder and gang r*pe.

One of the men, Vinay Sharma, broke down in tears and cried loudly as the sentence was announced.

As the news broke, crowds inside the building and outside the courtroom roared with cheers and applauded the judgement.

The prosecution team congratulated each other, with lead lawyer Dayan Krishnan saying: “We did our job. We are happy with this sentence.”

The victim’s father, who couldn’t hide his joy over the judge’s verdict, said the family was satisfied, as he left with his wife and sons.

“We are very happy. Justice has been delivered,” he told reporters inside court flanked by his wife and sons.

The victim’s family, along with numerous politicians and government officials, had long called for the men to be executed.

The case has been closely followed across India, seen as a reflection on rampant mistreatment of women and the government’s inability to deal with crime.

Judge Yogesh Khanna issued the judgments against the men, accused of tricking the woman and a friend of hers into boarding the bus, then raping her and savaging her with a metal pole. She died two weeks later.

“I convict all of the accused. They have been found guilty of gang rape, unnatural offences, destruction of evidence … and for committing the murder of the helpless victim,” Judge Khanna announced.

The trial of the four men, which took about seven months, is astonishingly fast by Indian standards.

The trial in Delhi has heard more than 100 witnesses, including 85 for the prosecution.