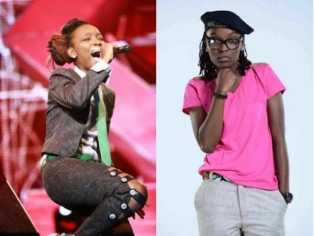 Winner of the just concluded maiden edition of Glo X Factor, Obianuju Catherine Udeh aka DJ Switch has revealed that she had a child in 2005, three years before winning the Star Quest talent hunt show along with Da Pulse.

“My baby is eight and I would rather keep the identity of the child’s father private,” she said.

The rapper and single mum who is in her late 20s also said that she’s currently in another relationship, which she said has been on for three years.

“He understands me, I understand him….We don’t pry into each other’s business but we always make out time to see each other,” she added.

DJ Switch had, after being crowned the winner of the maiden edition of Glo X Factor, apologised to her mother saying: –

“I am sorry, mum, for being away from home for so long while in search of glory. Now that I am back, I will take good care of you.
“I was like a prodigal son, who had an opportunity in the past but due to youthful exuberance I mismanaged the resources. Now, I am a better person and more matured, I won’t disappoint my mum and my fans.”

Switch emerged winner of the introductory edition of the music talent show ‘GLO X-Factor’ over the weekend, walking home with N24m, an SUV and a recording contract with SONY Music.