A Benin High Court, which awarded N25million as damages to the favour of Edo State Governor, Adams Oshiomhole, in a libel suit against the publishers of News of the People, a soft sell weekly magazine. 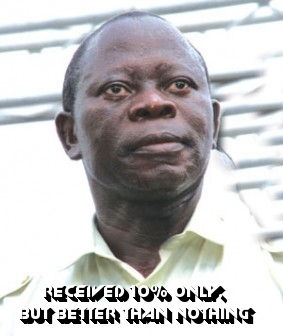 The magazine had reported that Governor Oshiomhole impregnated a student of the state-owned, Ambrose Alli University, Ekpoma, bought the said girl a jeep and interfered in the academic activities of Ambrose Alli University, Ekpoma, on behalf of the girl, adding that Governor Oshiomole used sexual performance enhancement drugs and that he had performed traditional marriage rites precedent to marriage between him and the said girl.

The governor told the court that he demanded damages because the said the publication caused him and his children psychological trauma, six months after the death of his wife, as the libelous piece was widely circulated, to coincide with preparations for one of his daughter’s wedding.

“When I called a brother governor to sponsor my daughter’s wedding, the governor said he was confused, and asked me if I was the one doing the marriage or my daughter. He added that he was reading a magazine which said that I was about getting married to a university student, and that the said wife-to-be was already pregnant.”

Justice Efe Ikponmwen in his judgment, also ordered the magazine to publish a well-worded retraction and apology in a similarly conspicous manner in an edition of the magazine.

He held that the governor’s evidence proved that the magazine’s publication was libelous, and that even though the public has a right to know about a public officer, such information should be in line with the law and must not be in bad light.