Actress Benita Nzeribe has fiercely denied making comments that she can marry a truck pusher and said she does’nt ever want to be associated to poverty. 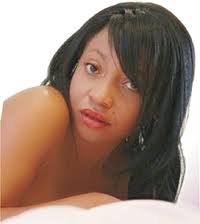 She reportedly said: “If I have to say the truth, marriage is not all about money or the little things of life. We should marry for real love. That is why I see myself as being able to marry whoever I am in love with, no matter his status in life.

That is to say, even if the guy is a wheelbarrow pusher, I would marry him so long as my heart is with him”

But In a recent telephone chat with Reginald Chukwu of Nigeriafilms.com, the actresses furiously denied saying she could marry a truck pusher

”How could I say such a thing, for crying out loud, nobody wants to be associated with poverty. I only said material possession shouldn’t be the major reason one should be attracted to a man, that what the man has got inside of him matters.

‘In other words, a man who has a bright future and a direction and knows where he is heading to is not bad getting married to, which was the answer I gave to the question in the interview, but unfortunately a journalist looking for a cheap publicity turned it around.

The same person who reported the news, I thank God saw me glittering in an event and knelt down pleading with me to forgive him for writing the false news.”