The Cynthia Osokogwu’s case which reverberated round Nigeria in 2012 seems not to have sent the right message to young ladies as many of them have fallen victims to criminals who use the internet to lure them into sex. 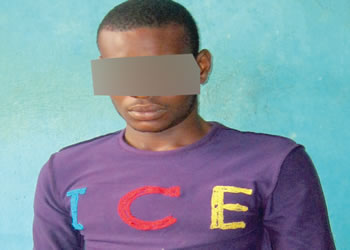 This danger in internet usage was brought to the fore again on Tuesday, August 27 when a 22-year-old boy, Seun Olutayo, of Idi-Osan, Ologuneru area of Ibadan allegedly seized the opportunity of connecting with a teenager to lure her into his house and raped her in the process. The girl was said to have been rescued after the deed had been done, while the Divisional Police Officer in charge of Eleyele Division, DSP Olawole Ayoola, ordered Olutayo’s arrest. The rape suspect is currently cooling his heels at the police station at Eleyele, Ibadan.

Lola Arowosafe (not real names), the 18-year-old girl, was waiting to start her tertiary education in November. She already sat for her post-UTME at The Polytechnic, Ibadan, and was awaiting the final result. In order not to be idle, she made up her mind to take up a clerical job if she could lay her hands on one.

In the process of a chat on togo on the internet, she saw an advert declaring a vacancy for the post of a sales girl. The follow-up on the job later cost her her virginity as Olutayo allegedly raped her.

Narrating her experience in the hands of the suspected rapist, Lola said she met him on togo about a month ago.  “About a week before the incident, Seun advertised a vacancy for a sales girl in a supermarket at Eleyele. I asked him about the details and he explained to me that it belonged to his sister. I explained everything to my mother and she said I should make sure that the supermarket is not farther than Eleyele because of where we live.

“When I got to Eleyele on August 27, I called Seun, asking for the name of the particular supermarket. He replied that his sister was ill and could not come to the supermarket. He said his sister asked me to come and check her at home. He described how I would get to the place and immediately I got there, he came to the junction of the house to pick me.

“When I entered the compound, I noticed that everywhere was quiet while the neighbourhood was also deserted. I was very scared. As I was about to step into the house, I asked him to call his sister out but he came up with another story that she went out to get some things for her illness. That was when I told him that he should call me when she is back but as I turned to go, he pulled me into the sitting room with the extension of my braided hair, hit my head against the wall and locked the door.

“I was shouting but he ordered me to keep quiet, saying that there were two the guys inside and if they should come out, the three of them would take their turns with me. Meanwhile, I already had an accident on my right hand which was plastered and bandaged so I could not use both hands to resist him.

“He pushed me down on to the rug, pinned me down with one hand while he used the other hand to pull off my skirt. He then forcefully had sex with me. The experience was so painful because I was still a virgin. After he had finished, he pulled off his singlet and used it to clean my inner thighs and legs because I was bleeding seriously.

“I was very weak thereafter but he pushed me out of his house and shut the door. I fainted there but a after a short while, I came round and dragged myself on. A resident of the neighbourhood who is a nurse stumbled on me and bought me a tin of milk to give me strength but I could not drink. I tried to narrate what happened but I was too weak. But I told her to look inside my bag where I kept the singlet which Seun used to clean my blood.

“My mother called and the woman picked the call and told her to come to Idi-Osan area of Eleyele. I was taken to hospital for treatment. He never told me that he wanted to have a relationship with me.”

Olutayo however said his action was not intentional, as he wanted to have a relationship with the girl. According to him, “I met the girl on togo. I placed an advert for vacancy in a supermarket for a manager and she said she needed a job. A woman told me in passing that she would need a sales girl for her shop but there was also a micro-finance bank in Ologuneru area which needed someone to be staying in a shop adjoined to it. I promised to help the girl secure one of the two.

She came on August 27. Before she came, I told her I liked her. I told her I wanted her to be my girlfriend and she did not object.

“When she came on Tuesday, August 27, I went to pick her at the junction of the house. I told her to be patient, promising to work on getting her the micro-finance bank job. When she was about going, I asked her about my discussion on love, telling her that I like her.

“We started having sex and I never knew she was a virgin. When she saw blood, she said told me I would regret what I did. I was pleading with her, telling her that I didn’t mean to hurt her. I promised to take her to the hospital but before I came out of the room, she had already left. She was found by some residents of the area whom I saw trying to give her milk because she was weak.

“She called her mother and described where she was, telling her to come and take her home as she was too weak to walk. She was taken to a nearby hospital. She might have thought I raped her but it was not intentional.”

When told that neighbours testified that luring and raping young girls was the suspect’s stock in trade, Seun denied it, saying that people usually say different things when such things happen. He revealed that when he saw how the girl was bleeding, he assisted her by using his singlet to clean her up and mop the rug that was also stained with blood.

When contacted, the police image maker in Oyo State confirmed the story, DSP Olabisi Okuwobi-Ilobanafor, saying that the suspect would soon be transferred to State Criminal Investigation Department, Iyaganku, for further investigations.