Home Metro News If I Have To Do It All Over Again, I’ll Re-Appoint Ribadu...
Facebook
Twitter
WhatsApp 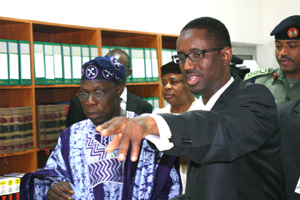 Former President Olusegun Obasanjo has described the appointment of former chairman of the Economic and Financial Crimes Commission,EFCC, Farida Ibrahim as a square peg in a round hole.

Mr. Obasanjo made this assertion in an exclusive interview with Zero Tolerance, a magazine published by the anti-graft agency.

The former president, whose administration established Nigeria’s two main anti-corruption agencies, the EFCC and the Independent Corrupt Practices and other related offences Commission, ICPC, said he was made to understand that former Delta State Governor and convicted money launderer, James Ibori, co-conscripted Mrs. Waziri into the top job at EFCC.

“I know that the woman they brought in to replace Ribadu (Farida Waziri) was not the right person for that job, because I understood that one of those who head-hunted her was James Ibori.”

“If James Ibori, who is now in a U.K. prison for fraud, head-hunt somebody who will fight corruption in Nigeria, then you can understand what happened,” he added.

When asked to shed more light on his view about the appointment of the former anti-corruption boss, Mr. Obasanjo in typical fashion bluntly stated that she did not possess the qualities and clout required to head an organization such as the EFCC.

Ms. Waziri, a retired Assistant Inspector General of Police, was appointed head of the EFCC in 2008 after the controversial exit of the pioneer chairman of the commission, Nuhu Ribadu, also a former police officer.

Her tenure, right from the onset, was dogged by various controversies including the claim that she had stood as surety for her former state governor, Senator George Akume when he was charged with corruption; an allegation she vehemently denied.

While making further comments on the EFCC, Mr. Obasanjo also said that in order to clear himself of corruption allegations, he asked the commission, then under Mr. Ribadu, to probe him.

“They also did same with all people on my farm. One of them was telling me the other day how Lamorde called him three times and took statements from him. The EFCC even made sure they did not submit that report to me; they waited until I left and updated their report after going round the world and saying look this is the report.

“Nobody should be below board in the fight against corruption,” he added.

On Mr. Ribadu, the former president hailed his protégé’s performance as EFCC boss, saying his diligence contributed to reducing corruption in Nigeria and improve her rating by Transparency International.

He queried the manner Mr. Ribadu was removed from office saying he cautioned late President Umaru Yar’Adua against the removal.

Mr. Obasanjo said if given the opportunity again, “I will reappoint Mallam Ribadu and I will not dismiss him the way he was dismissed from the EFCC.”

However, it was not all kudos for the former anti-graft boss and former presidential candidate of the defunct Action Congress of Nigeria, ACN, as Mr. Obasanjo gave him the flaks for hobnobbing “with people he had declared as corrupt” in veiled reference to Mr. Ribadu’s political patronage of Asiwaju Bola Tinubu.