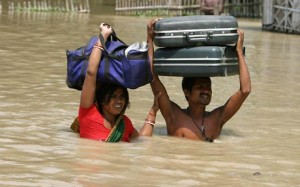 Massive flooding has forced 15,000 people to evacuate villages in the west Indian state of Gujarat, where heavy rains and swollen rivers have inundated cities and closed off roads and railway lines.

Schools across the districts of Bharuch, Vadodara and Surat remained closed Wednesday, while fire brigades, police and disaster response teams were working to rescue people.

People waded through thigh-deep water on the streets of the state’s main city of Ahmedabad, where waterlogged cars and buses became stranded.

In the city of Vadodara, animal activists say at least four crocodiles have been recovered from roads and courtyards.

The floods followed heavy rains that caused rivers including the Vishwamitri and the Narmada to swell above levels considered safe.