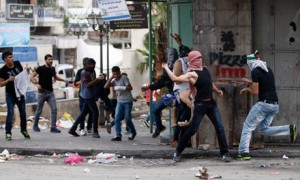 Israel’s military forces fired rubber bullets at stone-throwing Palestinians during clashes in the city of Hebron in the occupied West Bank, as troops hunted for the suspected killer of an Israeli soldier.

Tension has flared in the aftermath of both Sunday’s killing and the death of another Israeli soldier in a separate incident just days earlier.

A military spokeswoman told the AFP news agency on Monday that most of the roadblocks used to seal off the city the previous night were removed by morning and the army was searching in a “more specific” manner.

The army had apprehended two Palestinians for holding hunting rifles, but later determined they were not connected to Sunday’s incident.

Following the attack, Israeli Prime Minister Benjamin Netanyahu ordered the resettlement of the disputed Machpela house, a Hebron structure from which he had ordered the removal of 15 Jewish settlers last year.

“Whoever tries to uproot us from the city of our patriarchs will achieve the opposite,” he said in a statement. “We will continue to fight terror and strike at its perpetrators with one hand, while strengthening the settlements with the other.”

The settlers, who claimed to have bought the Hebron building from its Palestinian owners, inhabited the structure briefly before being removed in April 2012, with the defence ministry saying they did not have the necessary permits to finalise the purchase.

Meanwhile, an Israeli cabinet minister urged Netanyahu to rethink negotiations with the Palestinian Authority, following the killing of the two soldiers.

In an interview with Voice of Palestine, the Palestinian Authority’s Foreign Minister Riyad al-Malki accused Israel of unfairly “holding the Palestinian leadership responsible for what happens in the West Bank”.

Israeli army spokesman Brigadier General Yoav Mordechai ruled out a link between the two killings of soldiers and rebuffed suggestions they indicated a deterioration in Israel’s security situation.

“We see these as isolated incidents,” Mordechai said in a statement, “not as a new trend.”