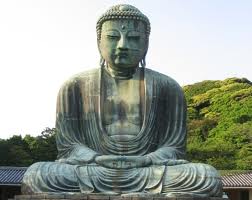 Life is fleeting and so are the images of Buddha that Japanese artist Koshi Kawachi carves – from stick-shaped snacks made of corn. Feeling the need to express the ephemeral nature of life after the death of his grandfather, Kawachi began creating the Buddha statues from the snacks nearly six years ago with a handheld drill that resembles a dental tool. “I am just carving out what already exists inside the material,” the bespectacled 40-year-old told Reuters. “My mind is empty when I look at the snack and carve.” Each snack stick costs about 10 yen ($0.10) and they come in 18 flavors, including fermented soybean and octopus dumpling. The cheese ones are softer and require a different carving technique, Kawachi said. He sets the 10-cm (4-inch) snacks on end at his work table, praying and bowing his head once before starting to carve. He bows once again after finishing a few moments later and then reverentially lifts the statue into his mouth and snaps off the body with a crunch, savoring each chew. “Humans are said to have 108 cravings or sins,” said Kawachi, who over the years has completed a sculpture with 107 of the statues. “To my artwork I have added the story that, to overcome these cravings, I carved these statues and got up to 107. But I always give in to my worldly cravings at the 108th statue and gobble it up.” Kawachi said he priced the sculpture, carefully stored in a plastic case, at 300,000 yen ($3,000) but there have been no takers. The oil and salt in the snacks have preserved them. “If you use stone or metal, it becomes kind of preachy, a bit like something you don’t want to listen to,” he said. “But if it is a snack, it becomes casual.” ($1 = 99.3 yen)