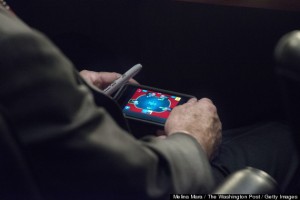 Congress held its first public hearing about U.S. plans for military intervention in Syria on Tuesday.

At some point during the conversation, Sen. John McCain (R-Ariz.) — who has been skeptical about President Barack Obama’s proposal for “limited” action in Syria — was taking a break to play poker on his phone.

McCain has long advocated for military action in Syria, but said earlier on Tuesday that Obama’s proposal “might be doomed in the long run.” McCain said he will support Obama’s request to intervene in Syria if the move would “reverse the situation on the battlefield.”

UPDATE: Realizing he’d been caught in the act, McCain tweeted about his poker game: