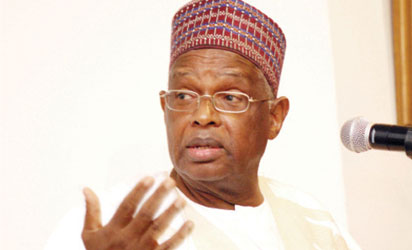 Prof. Jubril Aminu is a founding member of the People’s Democratic Party (PDP). He was also at different times the Minister of Education and Petroleum Resources; a vice chancellor and a Nigerian Ambassador to the USA. He was equally a senator from 2003-2011.

In this interview culled from Vanguard, he speaks on the PDP crisis, saying the move by former Vice President Atiku Abubakar and some governors to form a parallel faction of the party is borne out of the need to remain politically relevant.

According to him, President Goodluck Jonathan should concentrate on delivering on the mandate given to him by Nigerians and worry less about second term, which, he says, the president would get on a platter, if Nigerians see him as performing.

How do you see the breakaway moves of some PDP members led by former Vice President Atiku Abubakar, some governors and former national officers of the party?

What they did is nothing to worry about. Democracy is partly about the expression of personal opinions. There is nothing in jumping ship by any party member under democracy. As an original founding member of the PDP, I have been around all the time and I can be described as a major stakeholder in Nigeria and my state of Adamawa.

I don’t support what they did and I also presume that what they did was not motivated by their love for the country but by personal ego and a way to salvage themselves from the situation in which they have found themselves. I suspect that when we get to know the extent of the forces behind the move, one would be surprised to see powerful people inside and outside the PDP, not necessarily governors, who are trying to settle scores or re-direct the party in some ways or just playing mischief.

I don’t get jittery when this type of thing happens. Nigeria moved from the worst moment to the present without collapsing. That will not happen since we survived the June 12 crisis that led to the sacking of Interim Head of State, Chief Ernest Shonekan, from office. What is happening now does not worry me. Until about a few months ago, there were only two parties but now we have new ones, which have no real ideology. To that extent, nobody should get jittery because these groups are driven by ego and their games don’t add up. I suspect that they need some tricks in order to survive.

So, nobody should be worried about the antics adopted by the people causing trouble for the party.

In other words, they are frustrated people?

They are losers and they are looking for new avenues to win the game. Let me give you an example: Atiku does not stand any chance in 2015 because Jonathan is already in the game for re-election and he Atiku needs a new game in order to be relevant politically. Obasanjo, for example, is finished, but he has decided not to be seen as finished. So, all these people need a new game in order to be politically relevant. They have decided they are not finished politically. These are some of the things you should look at and not to be scared by what is happening. It is nothing new.

But when you put together all that is happening now, do you see the PDP resolving its crisis in order to win the next election?

The crisis will be resolved, but I don’t know who will be the scapegoat at the end. I don’t know who they will use to resolve it. This entire thing is being done to retain power by those who are there and those outside also want to wrest power from those wielding it. So, what is happening is a normal political game that goes on in any democracy and it will not break the party and the country as some persons have predicted.

Some people insist that the National Chairman, Alhaji Bamanga Tukur, be removed as a condition for peace to reign in the PDP. Are they justified?

Those are very mean people, particularly the Adamawa State governor, who never liked Tukur. He does not want Tukur at any point and has always gone for his jugular. That is unfair and unhealthy for the party and the country.

But do you think that Tukur has led the PDP well?

What power do you think Tukur really has? What power did Audu Ogbeh wield when Obasanjo was in power? Obasanjo is the one who changed party supremacy for something else. He sent people to the Ministry of Power in South Africa to study how power was being managed and they said, ‘no, go to the African National Congress, ANC, and see what the party has on power’. I don’t see that happening in Nigeria because our people are pre-occupied with personal control of everything. They are concerned with using power. So, you cannot really accuse Tukur of using power.

People like you, who have seen it all, should be able to play a fatherly role in the emerging crisis rocking the party and the nation. What advice have you given President Jonathan to solve the crisis?

I think Jonathan is too concerned about his second term and, because he is focused on that, there are people around him who are making a huge capital out of the situation. His fixation on second term brings about a good menu for people to exploit. He should focus more on fixing Nigeria and believing that, at the appropriate time, Nigerians will vote for him. Let me give you an example.

Lagos State governor is one governor who is working without looking back. He does not want the state to be ruffled by anyone. He keeps on working not minding whose ox is gored. The people are happy that the governor is working for their interest. The President is too concerned about second term. My advice to him is to continue to do the work that he was elected to do and he will get a second term.

If he works hard, he will get his second term easily. All these people who are talking do so for selfish reasons and nothing more. But, at the end of the day, Nigerians won’t judge their performance but that of Mr. President. He should ask them to allow him the chance to do his work. Many of them do not wish him well; they are looking for an opportunity to exploit every loophole for their personal aggrandisement.

In other words, Jonathan himself should step forward and do the work at hand.

Exactly! That is what I mean. Look at the ASUU strike, he should face it. He should tackle the security challenges in the northern part of the country and the problems in the health sector. People are taking advantage of his obsession with second term and are making money from it. Jonathan should see that the things he promised Nigerians are faithfully implemented and his second term will be smooth sailing. That is my advice to him. Jonathan should learn from the situation and make more impact.