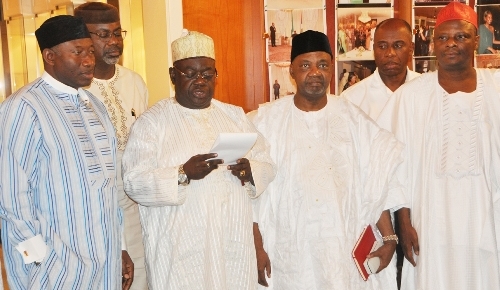 Despite their agreement on Sunday to cease the media war while peace talks continue, the Presidency appears to have broken that part of the bargain when it maintained that the seven People’s Democratic Party, PDP governors, who have engaged the party and President Goodluck Jonathan in an open confrontation the last couple of weeks, cannot determine the president’s ambition come 2015.

The governors, among other demands, are asking President Jonathan to keep to his promise of not staying in office beyond 2015.

At a meeting on Sunday night, it was gathered that the governors again reminded the president that on four different occasions ahead of the 2011 general elections, he promised not to seek re-election in 2015.

After Sunday’s talks, Niger State Governor Mu’azu Babangida Aliyu, flanked by Jonathan, vice president Namadi Sambo; PDP BoT Chairman, Tony Anenih; six governors from the “New PDP” and three pro-Jonathan governors, read out a communiqué which suggested that both sides had agreed to sheathe their swords, stop the media war and pursue the path of peace towards resolving the impasse.

But Special Adviser to the president on Political Matters, Ahmed Gulak, called a news conference yesterday where he said the president would resist any attempts to force him out of the race.

Gulak said the constitution gives his principal the right to seek re-election and that this could not be abridged by anybody.

“The 1999 Constitution of the Federal Republic of Nigeria, as amended, has given Mr. President the right to offer himself for second term if he so chooses, and nobody, either individual or group, can abridge his constitutional right,” he said.

“If he decides not to contest, let it be on his on his own volition; not because he is intimidated or cajoled into doing that.”

On one of the demands by the seven governors’ that Alhaji Bamanga Tukur must be removed as PDP national chairman for peace to reign in the party, Gulak said Tukur would survive the onslaught.

“There is only one PDP, and that PDP, as at today, is led by Bamanga Tukur. That we’ve some aggrieved members doesn’t derogate from the fact that there is only one PDP. And these aggrieved members, the elders are already talking to them and they are understanding the constitutional provisions and all of us must be guided by the constitution of the Federal Republic of Nigeria and the constitution of our party. We don’t just do things just because we want to do them, we must abide by the principles of democracy,” he said.

Gulak said the president would be guided by the constitution on three demands by the rebelling governors, which he said included asking Jonathan to forget his 2015 ambition, call off the Economic and Financial Crimes Commission from targeting “New PDP” leaders as well as Tukur’s removal.

“I have said it before that (the issues of) 2015, national chairman and EFCC are the three demands, and we’ve to be guided by the constitution,” he said.

“About EFCC, I’ve said it before and will say it again that Mr. President will never ask such an independent body not to carry out its job or statutory functions.

“About the national chairman (of PDP), I’ve said he emerged through the process of election and his removal is also guided by constitutional provisions.”

The presidential aide however maintained that with the outcome of Sunday night’s meeting, peace was gradually returning to the ruling party. “We’re talking and dialoguing,” he added.

He also faulted the claims by the Abubakar Kawu Baraje-led faction that the Presidency forced the factional national treasurer, Alhaji Tanko Ishiaku Gwamna, to resign.