Earlier reports that Police are exchanging fire with gunmen at the Westgate centre in the Westlands district – one of Nairobi’s most exclusive shopping malls, has been confirmed to indeed be a terrorist attack as suspected by Police and security guards at the mall.

The masked gunmen had stormed the packed upmarket shopping mall, killing 30 people (as against the 15 we reported earlier), telling Muslims to leave and wounding dozens more in a massacre claimed by Somalia’s al-Qaida-inspired Shebab rebels.

The rebels said the carnage was in direct retaliation for Kenya’s military intervention in Somalia, where African Union troops are battling the Islamists.

“The Mujahideen entered #Westgate Mall today at around noon and are still inside the mall, fighting the #Kenyan Kuffar (infidels) inside their own turf,” the group said on Twitter.

Another tweet by the group says,”Since our last contact, the Mujahideen inside the mall confirmed to @HSM_Press that they killed over 100 Kenyan kuffar & battle is ongoing.”

The Shebab tweet said the group’s warnings over Kenya’s military presence in Somalia had been ignored. Shebab “on numerous occasions warned the Kenyan government that failure to remove its forces from Somalia would have severe consequences,” it said.

“The Kenyan government, however, turned a deaf ear to our repeated warnings and continued to massacre innocent Muslims in Somalia #Westgate,” the group tweeted via its @HSM_Press account. “The attack at #WestgateMall is just a very tiny fraction of what Muslims in Somalia experience at the hands of Kenyan invaders,” it said.

Kenyan forces entered Somalia two years ago to fight the Shebab, and remain in the country as part of an African Union force that is supporting Somalia’s internationally backed government. 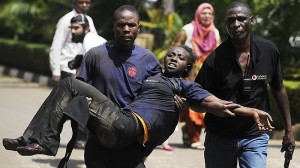 The Red Cross confirmed that 30 people had died and 60 more were injured in the attack.

A security source said police and soldiers had finally “pinned down” the gunmen after hours of fierce gunbattles and painstaking evacuations, with police going shop to shop to secure the Westgate shopping mall.

“The attackers have been isolated and are pinned down in an area on one of the floors. The rest of the mall seems to be secure,” the source told AFP at the scene.

The gunmen told hostages that non-Muslims would be targeted, said Elijah Kamau, who was at the mall at the time of the midday attack.

“The gunmen told Muslims to stand up and leave. They were safe, and non-Muslims would be targeted,” he said.

Jay Patel, who sought cover on an upper floor in the mall when shooting began, said that when he looked out of a window onto the upper parking deck of the mall he saw the gunmen with a group of people. Mr Patel said that as the attackers were talking, some of the people stood up and left and the others were shot.

Terrified shoppers huddled in back hallways and hoped the militant gunmen lobbing grenades and firing assault rifles inside the mall would not find them. When the coast was thought to be clear, crying mothers clutching small children and blood-splattered men sprinted out of the four-story shopping centre.

Witnesses said at least five gunmen – including at least one woman – first attacked an outdoor cafe at Nairobi’s Westgate Mall, a shiny, new shopping center that hosts Nike, Adidas and Bose stores. The mall’s ownership is Israeli, and security experts have long said the structure made an attractive terrorist target.

The attack began shortly after noon with bursts of gunfire and grenades. Shoppers – expatriates and rich Kenyans – fled in any direction that might be safe: into back corners of stores, back service hallways and bank vaults. Over the next several hours, pockets of people poured out of the mall as undercover police moved in. Some of the wounded were being transported in shopping carts.

“We started by hearing gunshots downstairs and outside. Later we heard them come inside. We took cover. Then we saw two gunmen wearing black turbans. I saw them shoot,” said Patrick Kuria, an employee at Artcaffe, the restaurant with shady outdoor seating.

Frank Mugungu, an off-duty army sergeant major, said he saw four male attackers and one female attacker. “One was Somali. The others were black,” he said.

Senior police sources described the attackers as a well-organised “terror gang” numbering around 10. The mall, popular with wealthy Kenyans and expatriates and part Israeli-owned, was packed with around 1000 shoppers when it was besieged at midday.

An eyewitness told AFP that he heard the gunmen speaking Arabic or Somali and saw the group executing shoppers, in what was the worst attack in Nairobi since an al-Qaida bombing at the US embassy killed more than 200 in 1998.

“The death toll is now standing at 30. This includes those who have died at the scene and at the hospital,” a senior police official told reporters. The Red Cross confirmed the figure and said another 60 had been wounded in the attack.

Americans were reportedly among those injured, the United States said as it condemned the “senseless act of violence”.

“We have reports of American citizens injured in the attack, and the US embassy is actively reaching out to provide assistance,” US State Department spokeswoman Marie Harf said without elaborating, citing privacy concerns.

Somalia’s president – the leader of a country familiar with terrorist attacks – said his country knows “only too well the human costs of violence like this” as he extended prayers to those in Kenya.

“These heartless acts against defenceless civilians, including innocent children, are beyond the pale and cannot be tolerated. We stand shoulder to shoulder with Kenya in its time of grief for these lives lost and the many injured,” President Hassan Sheikh Mohamud said.

A shop manager who managed to escape said at one point “it seemed that the shooters had taken control of all the mall”.

“They spoke something that seemed like Arabic or Somali,” said a man who escaped the mall and gave his name only as Jay. “I saw people being executed after being asked to say something.”

Shocked people of all races could be seen running away from the Westgate centre clutching children while others crawled along walls to avoid stray bullets.

Kenneth Kerich, who was shopping when the attack happened, described scenes of panic.

“I suddenly heard gunshots and saw everyone running around so we lied down. I saw two people who were lying down and bleeding, I think they were hit by bullets,” he said.

An eyewitness who survived the assault said he saw the body of a child being wheeled out of the mall.

“The gunmen tried to fire at my head but missed. At least 50 people were shot. There are definitely many casualties,” mall employee Sudjar Singh told AFP.

The four-storey mall, which has several Israeli-owned businesses, is a hub for Nairobi-based Westerners and one of the foremost symbols of Kenya’s affluent classes. It opened in 2007 and has long been considered a potential terror target.

The mall is popular with the large expatriate community living in the residential neighbourhoods around it, including with foreign staff from the United Nations, which has its third largest global centre nearby.

Security agencies have regularly included the Westgate shopping centre on lists of sites they feared could be targeted by Al Qaeda-linked groups.

British Foreign Secretary William Hague said on Twitter that his country was “in close touch with Kenyan authorities about the attack in Nairobi. Our urgent priority is the welfare of UK nationals.”

Anti-terror Police Unit boss Boniface Mwaniki said vests found were similar to those used in attacks that killed 76 people in Uganda who gathered to watch the soccer World Cup finals on TV in July 2010. Al-Shabab claimed responsibility for those bombings, saying the attack was in retaliation for Uganda’s participation in the African Union’s peacekeeping mission in Somalia.