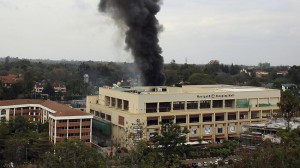 Kenyan officials have said security forces controlled nearly all of an upscale mall, two days after it was seized by members of a Somali terrorist group who invaded with guns blazing, killing at least 62 people.

The security forces are locked in a fierce, final battle with the Islamist gunmen inside the shopping centre with huge explosions and a barrage of heavy gunfire echoing out of the complex.

Three attackers had been killed in the fighting, officials said, and more than 10 suspects arrested. Eleven Kenyan soldiers were wounded in the running gun battles. By evening, Kenyan security officials were claiming the upper hand.

“Taken control of all the floors. We’re not here to feed the attackers with pastries but to finish and punish them,” Police Inspector General David Kimaiyo said on Twitter.

A thick cloud of black smoke billowed out from the Westgate mall as Kenyan officials said the 50-hour-long siege – which has seen the gunmen massacre at least 62 people and take dozens more hostage – was close to being resolved.

“We think the operation will come to an end soon,” Interior Minister Joseph Ole Lenku told reporters camped outside the vast part Israeli-owned complex, which was popular with wealthy Kenyans and expatriates.

A soldier holds an RPG near the Westgate shopping mall in Nairobi, Kenya, as smoke rises from it.

“We are in control of all the floors, the terrorists are running and hiding in some stores… there is no room for escape,” he said, adding that some hostages had been freed, but without giving specific numbers. Two gunmen were also killed in the fighting. Around 200 people have been wounded, officials said.

“Thumbs up to our multi-agency team, we have just managed to rescue some hostages,” police chief David Kimaiyo said in a message on Twitter on the third day of the standoff.

The explosions sent smoke billowing from the shopping complex, and initially, reports suggested it was either an attempt by the Kenyan military to blow a hole through the roof of the mall, or the rebels inside had blown themselves up. 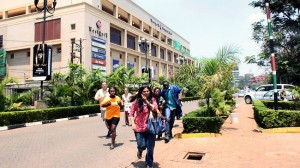 Late on Sunday, Kenya’s National Disaster Operation Centre said on Twitter that “this will end tonight. Our forces will prevail.”

British Prime Minister David Cameron was cutting short his stay with Queen Elizabeth II on Monday to return to London to hold an emergency meeting on the Nairobi shopping mall siege.

Cameron has been staying with the monarch at her private Balmoral estate in Scotland — an invititation traditionally offered to the prime minister’s family in September.
Westgate mall Kenya

The British government’s emergency response committee COBRA met for a second time on Sunday over the attack at a Nairobi shopping mall.

Three British nationals have been confirmed among the 68 killed, with the Foreign Office saying that one of the three was a British-Australian national.

“I’m cutting short a visit to Balmoral to return to Downing St to chair COBRA late this afternoon, dealing with the Kenya terror attacks,” he said on his Twitter account.

The Kenyan army had earlier said it had managed to isolate the Islamist attackers, who stormed the complex at midday on Saturday, killing at least 68 people and taking hostages. Around 200 people were also wounded.

Many of the rescued hostages – mostly adults – were suffering from dehydration, Colonel Cyrus Oguna, a military spokesman, told The Associated Press.

Security and intelligence sources told AFP that Israeli agents were also assisting in the operation, and Kenya’s National Disaster Operation Centre said a “major engagement” with the Al Qaeda-linked Shebab fighters was in process.

“Our concern is to rescue all hostages alive and that is why the operation is delicate,” the Kenya Defence Forces said in a situation update.

“All efforts are underway to bring this matter to a speedy conclusion,” it said, adding four of its soldiers were wounded in what appeared to be a final battle to secure the mall, which is popular with wealthy Kenyans and expatriates.

“The criminals are now all located in one place within the building… We have as good a chance to successfully neutralise the terrorists as we can hope for,” Kenyan President Uhuru Kenyatta said in a speech to the nation.

“They shall not get away with their despicable and beastly acts,” Kenyatta said in an emotional speech, in which he announced he had lost a nephew and his fiancee in the attack. “We will punish the masterminds swiftly, and indeed very painfully.”

Kenyatta said he had received “numerous offers of assistance from friendly countries” but that for now it remained a Kenyan operation.

However, a Kenyan security source confirmed that Israelis “are rescuing the hostages and the injured”. The Israeli foreign ministry refused to confirm or deny its agents were involved.

Officials estimated some 200 people have been wounded, and the Red Cross made a nationwide appeal for blood donors.