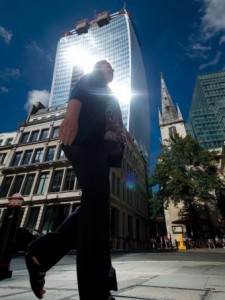 A cluster of new skyscrapers transforming the London skyline are often blamed for spoiling the view. Now one has been accused of “melting” a car.

A motorist said intense sunlight reflected from the “Walkie Talkie” – one of several flashy towers under construction in The City, London’s historic financial district – warped his Jaguar which he had parked across the road.

The skyscraper’s developers said they were seeking to rectify the problem which they blamed on the position of the sun at certain times of day.

“The phenomenon is caused by the current elevation of the sun in the sky,” Land Securities and Canary Wharf said in a statement.

Three parking bays had been taken out of service pending a solution, they added.

Motorist Martin Lindsay told the BBC he had left his car for an hour opposite the building and returned to find the wing mirror, panels and Jaguar badge had “melted”.

“You can’t believe something like this would happen,” he said. “They’ve got to do something about it.”

The 37-storey building at 20 Fenchurch Street, which will feature a viewing deck and “sky gardens” open to the public, has been nicknamed the “Walkie Talkie” after its distinctive shape which appears to expand outwards at the top.